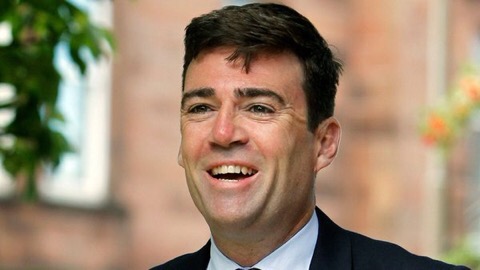 “It’s hard growing up in the north: if you say you want to be a doctor, lawyer or MP you get the mickey taken out of you.”
The words of Andy Burnham who has today launched his campaign to become the Labour candidate for Greater Manchester’s Mayor.

The shadow Home Secretary’s choice of words has already led to some derision, one wag wondering if his running mate would be a kestral.

The Liverpool born MP  said that Westminster had failed the North and vowed to try and ensure that all young people in Greater Manchester could go to university, get a good apprenticeship or set up a business.

During his speech, Burnham said that The Mayor of Greater Manchester is a Cabinet-level job that requires Cabinet-level experience.

He also admitted  that the Labour Party has been too London-centric.” I want to give Labour a stronger northern voice that speaks for people here”

The Labour Party will chose its candidate in August.Interim Mayor Tony Lloyd and Bury MP Ivan Lewis are also standing.

Speaking at his launch in Manchester today, the MP for Leigh said that he wants to use the Mayor’s housing fund to buy private property from stay away landlords, and would set up a Greater Manchester Rent-to-Own scheme to build new homes and get young people on the housing ladder.

Greater Manchester will remember them all this weekend