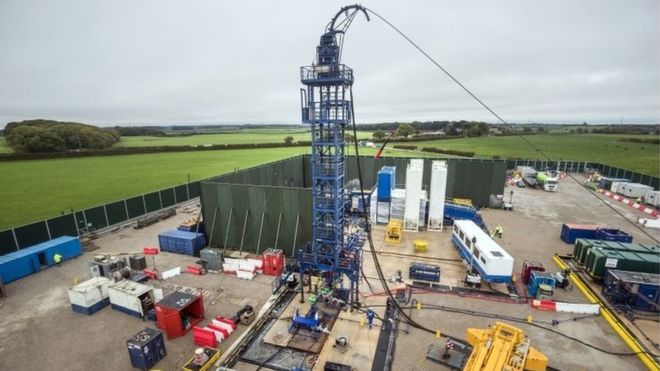 New research from Labour released to coincide with a visit by Jeremy Corbyn to Lancashire, has found that Tory plans to force through dangerous fracking would release CO2 equivalent to the lifetime emissions of nearly 300 million cars, obliterating the UK’s commitments under the Paris Agreement.

The government is already on track to miss key legally-binding targets set out in their carbon budgets, but these figures illustrate just how damaging Tory fracking would be. Projected emissions from fracking would overshoot the UK’s current annual emissions 20 times over, ending any chance of complying with our Paris climate obligations.

The UK holds an estimated 1,400 trillion cubic feet in shale gas reserves, of which roughly ten per cent should be recoverable through fracking. The Tory ambition is for these reserves to be fully exploited, releasing over seven billion tonnes of CO2 into the atmosphere.

This environmental cost of this would be equivalent to the  lifetime emissions of 286 million cars, or 29 new coal-fired power plants or the emissions of 6,000 flights to Pluto and back in a standard passenger airplane;

These figures likely underestimate the true impact of Tory fracking, as they do not take into account the total emissions produced over the lifecycle of fracking sites – for example, fugitive methane emissions.

The current Conservative government has been a vocal and aggressive supporter of fracking despite mounting evidence of its disastrous impact on the environment. In 2013 then Prime Minister David Cameron argued that “we cannot afford to miss out on fracking”, calling for the practice to be expanded to “all parts of our nation”.

Under Theresa May the government has continued its full-throated support for the practice. Last year Energy Minister Claire Perry was widely criticised for holding secret meetings with fracking firms, the minutes of which revealed an ambition to “export the UK model” of fracking around the world.

Community and environmental groups have fought back against the Tory fracking dash through protest action and battles in the courts. Earlier this month the government’s policy was ruled unlawful by the High Court for failing to take into account the climate impact of fracking.

Tory support for fracking has continued unabated even while the government has withdrawn support for safer sources of energy such as nuclear, tidal and onshore wind. In the last year major projects such as the Wylfa Newydd nuclear plant and Swansea Tidal Lagoon have been scrapped, while there has been an effective ban on new onshore wind since 2015.

In power, Labour will listen to the voices of communities across our country and ban fracking. Instead we will invest in new renewables, end barriers to onshore wind, and support new nuclear as part of a sustainable and secure energy mix.

Jeremy Corbyn, Leader of the Labour Party, in Lancashire yesterday against the Tories fracking plans in the region, said:

“The Conservatives’ fracking plans will damage our environment and fly in the face of community opposition.

“There is a clear alternative to fracking. Clean, renewable energy is the future of our economy and will create over 400,000 jobs as part of Labour’s Green Industrial Revolution.

“Local communities in Lancashire and across the country are standing against fracking. In government, Labour will ban it once and for all.”

“Fracking can’t be part of the solution to climate change. These figures demonstrate the enormous debt we owe to the communities and campaigners who have fought back against fracking and prevented the Tories from pushing our country off a climate cliff.

“With the High Court ruling only this month that the government’s policy is unlawful and schoolchildren marching on the streets for climate action, the government needs to realise that this isn’t just a public relations exercise. It’s beyond time for them to change course and ban fracking before it’s too late.”