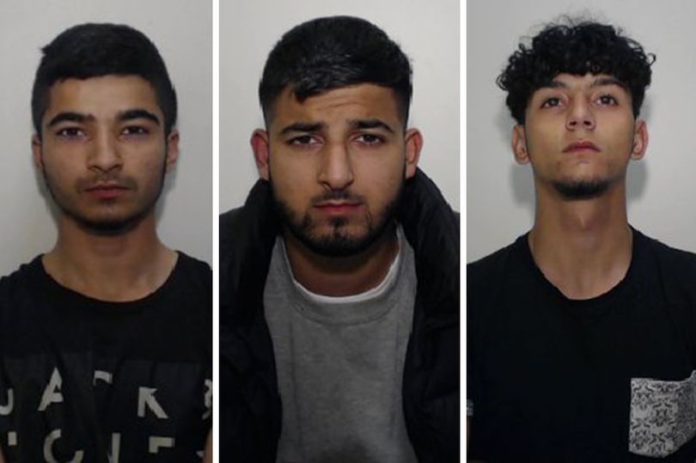 A family-run drugs gang based in Rochdale who forced a vulnerable young child to deal narcotics for them has been jailed.

The house was the base for their criminal enterprise, which involved the control and supply of class A and B drugs using three separate mobile phone numbers.

One of the drugs lines was known by the names ‘Woody’, ‘Tyson’ and ‘Rocky’. The other two were known as ‘Kez’ and ‘Doctor’.

But the lines and their operators were brought down by Operation Agenda – A Greater Manchester Police-led enquiry into drugs supply and modern slavery.

On April 5 2018 officers observed Ratib Ali and Junaid Rehman leave their address on Royds Street West and get into a white VW Golf.

They followed the vehicle to a supermarket car park where Ali was seen to put a phone in the car’s glove box as officers approached the vehicle on foot.

Rehman was searched and found to be carrying a knife. A further search of the car’s boot revealed number plates belonging to a VW Golf that had been stolen the previous month.

The pair were arrested and four phones they were carrying were confiscated. A large quantity of cash was later found during a search of the Royds Street West property.Examination of the phones revealed they were used to make and receive hundreds of calls every day to and from people buying drugs.

Enquiries revealed that the boy was being threatened by the gang, who claimed he owed them money, and had to deal drugs to pay off his debts.

The boy would be driven around in a car by one of the gang members and would be responsible for physically handing the drugs to clients.

Detective Chief Inspector Rick Hunt of GMP’s Rochdale Borough said: “This gang targeted and exploited a young boy, forcing him into a world of drug dealing and crime under threat of violence.

“He is now receiving help from specialist officers as he continues adjusting to a normal life away from the clutches of these despicable individuals.

“This was a large drugs conspiracy responsible for distributing a significant amount of class a drugs.

“But they were brought down thanks to the dedication and professionalism of our officers, who were able to utilise a broad range of surveillance and information gathering techniques to piece together this conspiracy.

“The best weapon we have against drug dealers is the wider community, on whom we rely to help us catch and prosecute those who seek to profit from the sale of narcotics.

“Drugs blight communities and ruin lives. If you suspect that drugs are being dealt in your neighbourhood, or you suspect a young person is being exploited, contact police on 101 immediately.”

Gail Hopper, director of Children’s Services at Rochdale Borough Council, said: “Through the effective joint working of our teams the vulnerable young people and adults involved were safeguarded whilst the offenders against them were brought to justice.

“Our complex safeguarding team, which includes the newly integrated Sunrise and the local Challenger teams, are working closely together to prevent and disrupt issues like this, where organised crime groups exploit young and vulnerable people.

“Sharing the skills and experience of safeguarding officers, police officers experienced in investigating organised crimes and our wider partners is important. We all take this sort of crime very seriously and these convictions are a reflection of the success of this approach.

“Other criminals out there who are targeting the young and vulnerable need to know we will be after them too. There is no place for such crimes in Rochdale borough.”