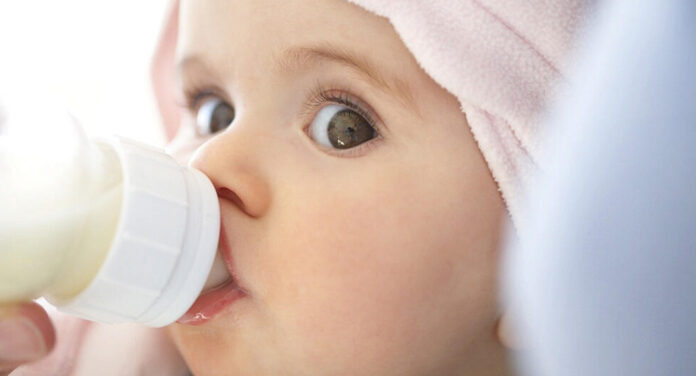 New research out today shows that high levels of microplastics (MPs) are released from infant-feeding bottles (IFBs) during formula preparation.

The research also indicates a strong relationship between heat and MP release, such that warmer liquids (formula or water used to sterilise bottles) result in far greater release of MPs.

In response, the researchers involved – have developed a set of recommendations for infant formula preparation when using plastic IFBs that minimise MP release.

PP-IFBs can release up to 16 million MPs and trillions of smaller nanoplastics per litre.

Sterilisation and exposure to high temperature water significantly increase microplastic release from 0.6 million to 55 million particles/l when temperature increases from 25 to 95 °C

The team undertook a global survey and estimated the exposure of 12-month-old infants to microplastics in 48 regions.

There is growing evidence to suggest that micro and nano plastics are released into our food and water sources through the chemical and physical degradation of larger plastic items. Some studies have demonstrated the potential transfer of micro and nano plastics from oceans to humans via the food chain but little is known about the direct release of microplastics (MPs) from plastic products through everyday use.

Polypropylene (PP) is one of the most commonly produced plastics in the world for food preparation and storage. It is used to make everyday items such as lunch boxes, kettles and infant-feeding bottles (IFBs). Despite its widespread use the capacity of PP to release microplastics was not appreciated until now.

“When we saw these results in the lab we recognised immediately the potential impact they might have. The last thing we want is to unduly alarm parents, particularly when we don’t have sufficient information on the potential consequences of microplastics on infant health.

“We are calling on policy makers, however, to reassess the current guidelines for formula preparation when using plastic infant feeding bottles. Crucially, we have found that it is possible to mitigate the risk of ingesting microplastics by changing practices around sterilisation and formula preparation.”