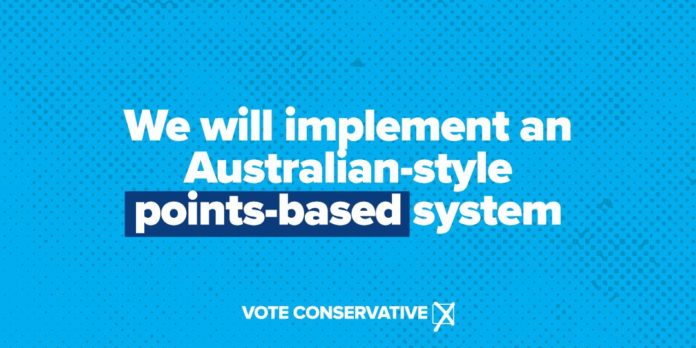 Home Secretary Priti Patel promised today that a Conservative government ‘will reduce immigration overall while being more open and flexible to the highly skilled people… such as scientists and doctors’, ‘end free movement’ and ‘introduce an Australian-style points system so that we can control our borders and protect our public services’.

The Party says that it wants to encourage and welcome highly skilled immigrants to Britain, whilst maintaining control so that we can plan and pay for public services.

Patel criticised Labour’s plan in which, it said, immigration will surge and put pressure on our schools, NHS, and public services saying that the biggest risk to the NHS was Corbyn’s plans for uncontrolled and unlimited immigration.

“The Labour Party is committed to maintaining & extending Freedom of Movement rights. But the Tories will remove those rights from the EU 3 Million. We will maintain them.

“The Tories break up families by barring spouses of British citizens, via an income requirement. Labour will scrap it, and extend Freedom of Movement rights to all those legally entitled to be here, including our own citizens among others.”