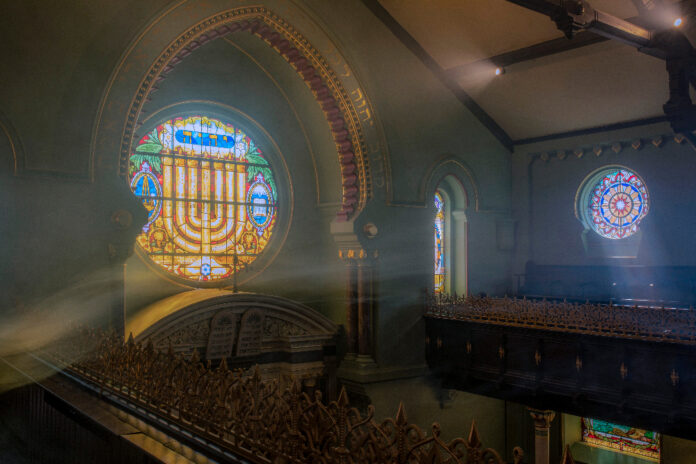 Tickets are now on sale to visit the new Manchester Jewish Museum which will be opening on Friday 2 July with a world premiere of Turner Prize-winning artist Laure Prouvost’s new installation The long waited, weighted gathering as part of this year’s Manchester International Festival.

Prouvost’s immersive installation centres around a new film which will play in 15 minute cycles on a screen suspended from the ceiling of the museum’s breath-taking Grade II* listed synagogue. Prouvost’s new film is inspired by the museum’s history as a former Spanish and Portuguese synagogue built in 1874 and its oral histories from the women who used to sit up in the Ladies’ Galleries of Cheetham Hill and Didsbury – where tradition and religion dictated that is where they were to sit during the services.

Bird imagery will feature heavily in Prouvost’s new film, symbolic of the unique bird’s eye perspective the women would have had in the synagogue, sat high above the men – where they could observe the service, chatter, share gossip and connect with each other. The theme of playful and alternative perspectives is something that can be seen throughout Prouvost’s work.

Local Sephardi women whose family members were amongst some of the synagogue’s former congregants have been filmed as part of Prouvost’s film. Working with film-maker Ciarán Wood, she has captured their reactions to the stories unearthed in the museum’s oral history collection, creating a new narrative exploring and sharing the women’s own personal experiences of sitting in that space.

Accompanying Prouvost’s installation will be brand new artworks created by the museum’s resident Women’s Textile Group. Set up in January 2019, the group is made up of women from a diverse range of ages, religions and cultural backgrounds, representative of the diversity of Cheetham Hill where the museum is located. During lockdown, fortnightly zoom workshop sessions have been led by local textiles artist Jo Scorah, who is a Sephardi woman herself. As an artist specialising in sculptural textiles, her practice has explored her own ancestry stemming from Aleppo in Syria. Her intention has been to build bridges through art and education.

Scorah has helped the Textile Group to collectively create materials that celebrate the local communities and faiths who engage with their culture, past and present, as well as providing an insight into religious customs and tradition. Many of the women have worked together on previous projects and have explored their differences and similarities through the textile group. Together they will create a piece that explores the identities of the women and their hopes for the future. This end result – a dress – will be worn by a Mannequin which will be displayed in the museum to accompany Prouvost’s installation.

Prouvost has also commissioned the group to design and create their own fabric and textile panels which will decorate the screen on which her brand new film will be projected. As Jo Scorah explains: “When MJM commissioned Laure Provost for the Manchester International Festival she shared an interest in what the Women’s Textile Group was doing and asked us to embroider four panels as a border for her projection. Her interest in imagery using birds and fruit such as lemons, clementines and pomegranates as well as the memories of some of the first Sephardic families to frequent the synagogue has led us to be inspired by their wonderful stories. We hope to do her justice!”

As part of the museum’s £6 million capital development, the synagogue, including The Ladies’ Gallery, and the synagogue itself has undergone an extensive programme of reparation works to lovingly repair and refurbish the Grade II* listed building ahead of its reopening. Multi-disciplined building conservation contractors and stained glass window specialists were involved in the restoration of this historic and architectural gem. The synagogue’s early decorative scheme has been reinstated after historic painters carried out painstaking research to unearth and faithfully restore the synagogue’s early colour scheme.

When Manchester Jewish Musem reopens from Friday 2 July, this beautifully restored synagogue will serve as both a major museum exhibit, offering visitors a unique insight into a Jewish place of worship dating back to the 1870s, and also as a stunning performance space in which the museum will host a year round programme of live cultural events, gigs, shows and concerts.

In addition to the restoration of the Spanish and Portuguese synagogue, the new museum also includes a café, shop, learning studio and kitchen, and gallery space exploring universal themes of journeys, communities and identities through the lens of Jewish Manchester.

Manchester Jewish Museum opens seven days a week to the public from Friday 2nd July from 10am – 5pm. Tickets are on sale from today, Thursday 20 May, for general admission and for The long waited, weighted gathering, co-commissioned by Manchester Jewish Museum and Manchester International Festival (access to Laure’s installation will be included as part of the museum’s general admission).

Tickets can be bought via www.manchesterjewishmuseum.com for entry between Friday 2 July – Sunday 18 July, advance booking only with limited capacities. There will be timed entry slots every 30 minutes with last entry at 4pm. On Thursday 8 and 15 July, during Manchester International Festival, the museum will be open late until 10pm with last entry at 8.30pm. The brand new museum café will be open until 4pm, later on Thursdays