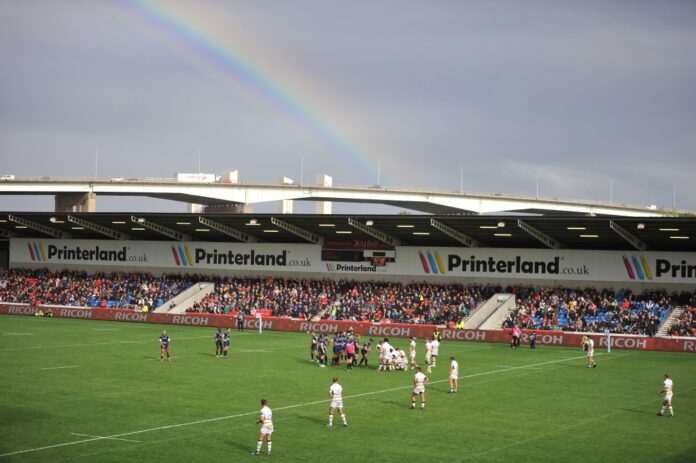 Sale Sharks have agreed an extension to their commercial partnership with the UK’s leading printer e-tailer, Printerland.

Altrincham-based Printerland has been a long-standing partner of the club having first agreed a deal back in 2004 to sponsor the Cheadle End of Sharks’ former home ground at Edgeley Park, before becoming official Family Stand sponsors at the AJ Bell Stadium in 2016.

In recent years, the partnership has seen over 10,000 match-day tickets given away to local charities by Printerland through a programme designed to introduce underrepresented groups in the north west to the game of rugby.

However, with last year’s season played behind closed doors, the club instead worked with Printerland to deliver community-based rugby sessions for schools and community groups in the region.

With fans now able to attend games, this year’s renewal will see the club bring charities and community groups back to the AJ Bell, supported by Printerland.

Mark Cueto, Sale Sharks’ Commercial Director and former player said: “We’ve had a fantastic 17-year association with Printerland, so I’m thrilled they’ve renewed with us again this year to carry on our partnership.

“We’ve been proud to continue the delivery of Printerland’s inclusivity programme through the pandemic, by delivering COVID-safe community-based rugby sessions with schools and community groups in the region.

“With fans starting to return to stadiums now, we can’t wait to welcome more groups to the AJ Bell Stadium as part of Printerland’s ongoing commitment to donating 2,000 match-day tickets per season.”

“We were grateful the club was still able to deliver on our promise to engage local charities in the region through community-based rugby sessions where lockdowns allowed, but we also can’t wait to welcome them back to the AJ Bell on match-days.

“Working with the club and the Sharks Community Trust has allowed us to use the sport of rugby to bring people together, and we love seeing the difference the initiative is making to children, young people and charities in the area.”