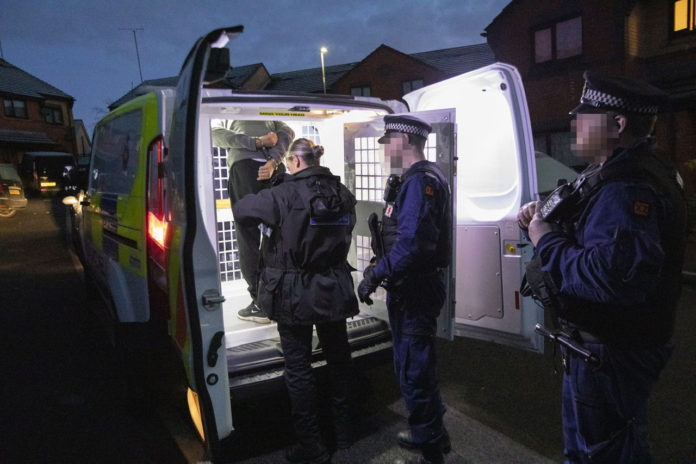 The three arrests were in relation to an ongoing firearms investigation.

The action comes after GMP launched a dedicated operation – codenamed Heamus – earlier in the month. The operation is set to tackle a dispute between two local crime groups, following a series of firearms discharges which have taken place since the beginning of September.

Today, two men – both aged 27 – were arrested on suspicion of conspiracy to commit murder.

A 27 year old woman was also arrested on suspicion of conspiracy to commit murder and perverting the course of justice.

A quantity of drugs and weapons were also seized.

Superintendent Rebecca Boyce, of GMP’s City of Manchester division, said: “Following this morning’s direct action, we have three people in custody and I would like to thank those officers who have worked extremely hard as part of this ongoing operation and who are committed to keeping the people of Cheetham Hill safe.

“Whilst we believe that these incidents have been targeted, we understand and appreciate how concerned local residents may be and as a result of this have set up this dedicated operation. We want to reassure those who feel affected that we are doing all that we can and stress that we are treating these incidents as an absolute priority.

“This is a complex investigation, which brings its own challenges and whilst we have made arrests, we are continuing to appeal for the public’s help. We believe that answers lie within the community and would urge anyone with information to get in touch. Whether you want to speak to us directly, or whether you’d prefer to talk to Crimestoppers anonymously, please do so if you think you can assist our enquiries with even the smallest piece of information.

“We will continue to work closely with partners in order to disrupt this kind of activity and I hope that this morning’s action demonstrates that are working hard in order to prevent any further incidents and protect those in our communities.

“This type of criminal behaviour is reckless and dangerous- it will not be tolerated on our streets.”

Two arrests after 63 year old man is hit by his own car after...