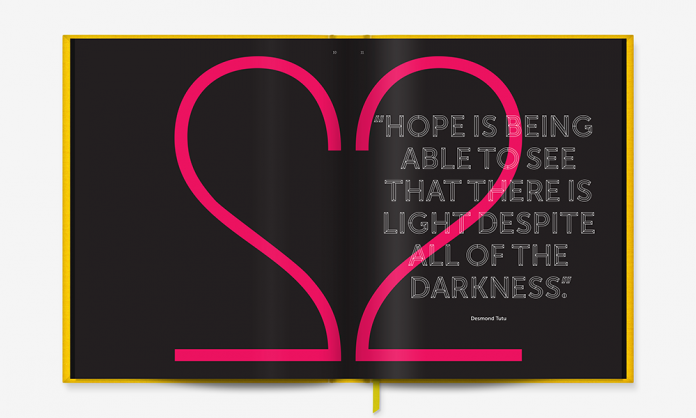 This is the Place, Choose Love, Manchester’, a fundraising book conceived in the wake of the Arena attack, and featuring Tony Walsh’s Manchester vigil poem, is now officially on sale with both Waterstones and Amazon generously offering to waive fees to stock the book and assist with the fulfilment of orders.

The hardback bound coffee table book, priced at £30, contains unique illustrations, designs and photographs set against lines from Walsh’s poem. 61 Manchester creatives, who spent the summer designing it, were invited to interpret the poem visually with all the profits going to Manchester based charities Forever Manchester, We Love MCR Emergency Fund and The Greater Manchester Mayor’s Homelessness Fund.

The roll call is extensive including world renowned agencies and designers like Peter Saville (New Order, Joy Division, Factory Records designer) and Malcolm Garrett (Buzzcocks designer) and the book also contains personal messages from Tony Walsh and the Mayor of Greater Manchester, Andy Burnham. It has been reported that famous Mancunian Noel Gallagher has even requested his own personal copy of the book after becoming a fan of Tony’s work.

The project is the brainchild of James Torry, owner of video and animation production agency Doodledo Motion. Commenting on the project he said: “After hearing Tony’s poem it was impossible not to be moved. It gave a city that was struggling at the time to know what to think or feel, some language to articulate it. Being part of such a strong creative sector, I knew that we could come together, use the words and make something beautiful and hopeful for Manchester – but I couldn’t have imagined how incredible the response from the creative community has been and the extraordinary lengths they would go to!.”

“People have literally put their day jobs on hold to help make this happen and we’re so grateful. The end result is not only visually stunning, but very moving and by supporting these brilliant charities, I know we all feel like we’ve created something really special that we hope will make a real difference. It feels like a project that could only have happened in Manchester.”

Tony Walsh said: “After performing the poem at the vigil, I realised the words had taken on a new depth and poignancy. They’ve become part of the fabric of the city. People have used them in music, in art, on buildings…it’s been remarkable. The idea of bringing the words to life and producing a lasting symbol of hope for the city was perfect to me. Seeing the finished book had me in tears. It’s beautifully crafted. I couldn’t be prouder.”

Club ashamed and embarrassed over banner flown over Etihad Stadium