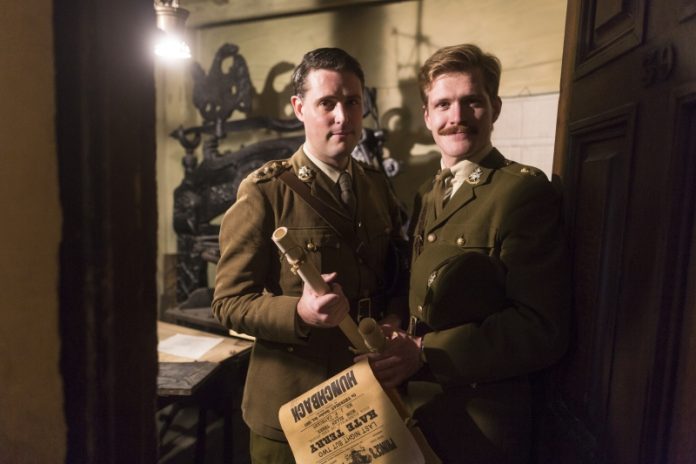 Stars of The Wipers Times had the chance to get up close to a slice of printing history when they dropped in to Salford Museum and Art Gallery.

George Kemp who plays Lt Pearson, and James Dutton (Captain Roberts), visited the museum to see a press similar to the one on which the legendary wartime trenches newspaper would have been printed a century ago.

The museum’s Columbian “Eagle” Printing Press was built in 1849 by London company Wood & Sharwoods, although they left their own name off the machinery and instead mention “George Clymer” to cash in on the popularity of his press.

The press was donated to the museum in 1968 by J.A. Sanderson & Sons Ltd of Sheffield. Sanderson’s were printers, stationers, ticket and poster writers. At present, damage to the frame means the press – on show in Lark Hill Place, a recreated Salford street inside the museum – cannot be used, but conservationists are seeking funds to restore it to its former working glory.

The Wipers Times tells the true and extraordinary story of the satirical newspaper created in the mud and mayhem of the Somme, interspersed with comic sketches and spoofs from the vivid imagination of those on the front line.

In a bombed out building during the First World War in the Belgian town of Ypres (mis-pronounced Wipers by British soldiers), two officers discover a printing press and create a newspaper for the troops. Far from being a sombre journal about life in the trenches, they produced a resolutely cheerful, subversive and very funny newspaper designed to lift the spirits of the men on the front line.

Defying enemy bombardment, gas attacks and the disapproval of many of the top Brass, The Wipers Times rolled off the press for two years and was an extraordinary tribute to the resilience of the human spirit in the face of overwhelming adversity. 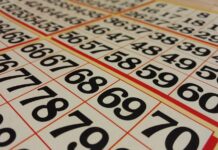 How to Play Online Casino from your Mobile?