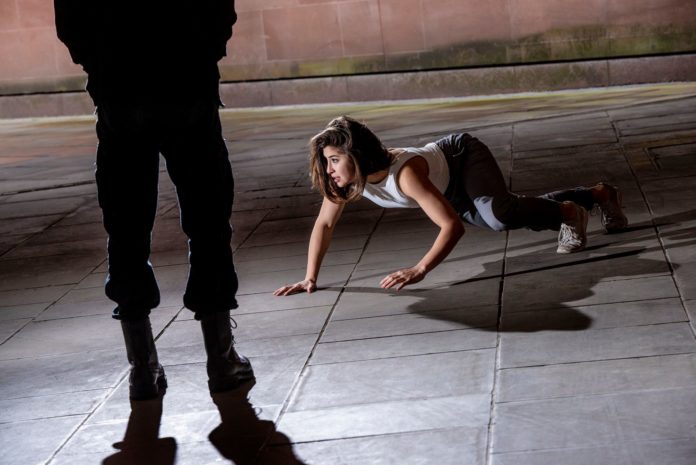 Over the last 12 years ago, Company Chameleon have developed a reputation for creating socially relevant dance theatre, which explores everyday human issues.  Themes in their work include mental health, masculinity and relationships.

In this new production, Company Chameleon explore the hidden parts of the unconscious mind and the darker side of our personalities.

Choreographer Anthony Missen says, “The shadow is present in everyone, but we only see it when light shines in particular way. Psychoanalyst Carl Jung identifies the shadow as the unknown or unconscious dark side of our personality. Most of the time we don’t see it at all, or acknowledge it, but it’s always there if you look closely enough.

Everyone has masks they present publicly which may or may not reflect what’s going on privately. We all prefer to put our best face forward. We don’t generally share the things we are embarrassed by, nor readily share comments and opinions which might offend.

It’s said that we all have three faces: our public face; the face that we show to our friends and family; and the face that nobody sees. It’s the latter that is supposedly our truest likeness, and this is what the piece explores.”

Based on the premise that there is no tomorrow, and the behaviour that manifests with this knowledge, the narrative of The Shadow follows six characters and their shadow counterparts as they are swept into different stories and places.

As part of the character development for the production, Anthony Missen researched and delivered a series of workshops, which asked the performers to look at their own shadow through word association tests, tasks and improvisations.

Anthony Missen explains: “I didn’t want to dream up characters for this work. Audiences recognise honesty, so honesty has to be found. I find the most thoroughly engaging and meaningful performances are when audiences are right there with the performers involved, with empathy and feeling what they are. I often like to see it as an experience rather than a performance. There has to be an authenticity to the performances, and this means the dancers revealing true parts of themselves in the parts they play. Early on in the process, I researched psychoanalytical methodology and practices, which informed the workshops exploring our own personalities and shadows. The approach gave the dancers their own stories to draw from, so they can reveal true parts of themselves in their performance. The intention is that the audience see the human in there and have a real response to who they are.”

A collaborative approach was also adopted in developing the choreography, and involved Anthony Missen working closely with the dancers to create the movement.

Anthony Missen said: “I shaped and directed what the dancers produced to avoid making assumptions, which might take away from the honesty of the performance. It’s a vulnerable and sensitive world we are diving into given the subject matter, so their wellbeing has been something I’ve been very conscious of throughout.

The dancers responded creatively to words, states, tasks, very involved and lengthy improvisations, archetypes, scenarios and situations. I then evolved selected movement material to make it speak before embarking on the journey of making parts speak to each other to create coherence. We created a huge palette resulting in a mammoth task of figuring out how it could fit together whilst retaining the roots of what the dancers had created.”

Highly athletic and physically impressive to watch, audiences can look forward to a production encompassing a rich mix of dance styles and an innovative and fresh movement language, which carries meaning.

As a Company committed to developing emerging dance talent, the shadows in the production will be performed by alumni of Edge Hill University and Bath Spa University.

Andrew Hurst, Chair of Company Chameleon and Chief Executive of One Dance UK, said, “It’s an exciting time for Company Chameleon. Since moving into their own dance studio in Openshaw, Manchester, the Company has had more space to explore and develop choreographically and creatively.  This is the first production to come out of the studio and I can’t wait to see it! It’s also the first time in over ten years that Company Chameleon will be premiering in their home city of Manchester, and we’re delighted to present this performance at HOME. This provides the perfect platform for the work to go on and tour to the Arts Centre, Edge Hill University, where we always receive a warm welcome, followed by a first-time appearance at Bath Spa University.  We look forward to meeting new and old friends on tour.”

Rufus Hound and Roberta Taylor to star in DUSTY, the musical