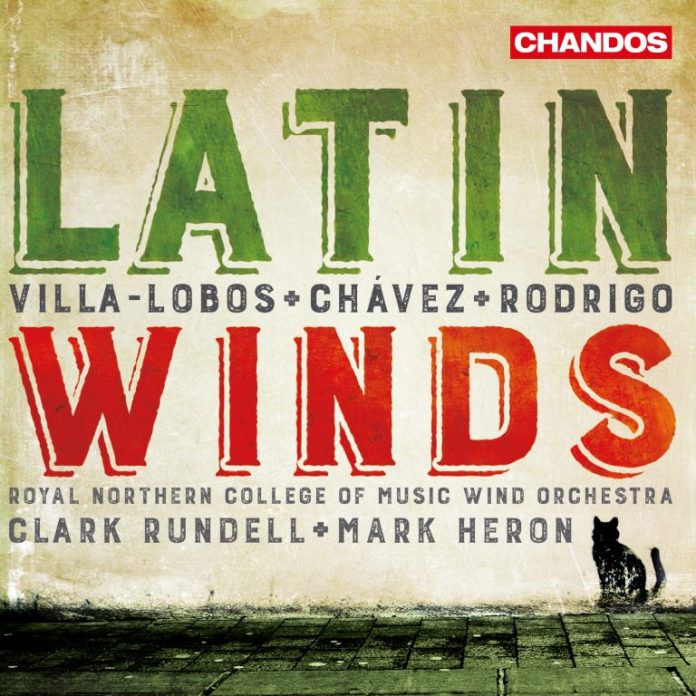 Conducted by Clark Rundell and Mark Heron, From Spain to Mexico and Brazil celebrates the strong Latin tradition of wind bands in an exhilarating programme.

The album prominently features works by one of the most iconic composers for winds, the Brazilian Villa-Lobos. Their liveliness, freely changing modalities, ease of flow, and likeable sonorities are a striking compositional signature, the unusual Concerto Grosso exploring a unique sound world with concertante discussion among the four wind soloists and the wind band.

Also heard are the tender wind Adagio by Rodrigo and his arrangement for band of his first major symphonic work, Per la flor del lliri blau, which dreamily evoke the age of mediaeval tales inspired his Concierto de Aranjuez. We are brought to Mexico with a stunning work by one of the country’s most popular composers, Carlos Chávez, celebrating a range of popular national genres: the march, waltz, and song.

Clark Rundell said: ‘Almost exactly 20 years on from our first disc on Chandos – the wind music of Percy Grainger, Vol 1 – we are simply thrilled to be rekindling our relationship with Chandos. The sound they create and, frankly, the other extraordinary orchestras which sit near us in their catalogue, never fails to raise the bar of expectation and performance of these great RNCM students. We hope you’ll enjoy hearing this amazing music, focusing on the wealth of glorious music from Latin countries and the prominent place the wind orchestra plays in their musical fabric.’

In 2000, the RNCM was presented with a Queen’s Anniversary Prize for Higher Education for its outstanding and pioneering work with the Wind Orchestra.With Chandos it has created the most important wind recording series since Frederick Fennell and the Eastman Wind Ensemble, featuring definitive recordings of important wind works by major musical figures. By unearthing these works and bringing them to light, they continue to contribute to the rewriting of the history of wind music.

From Spain to Mexico and Brazil will be release on 6 April. Pre-order you copy here.