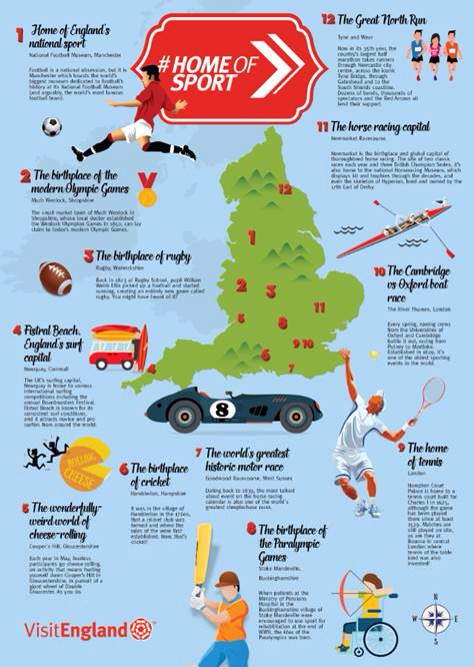 To mark 2015’s summer of sport, VisitEngland has launched a search to find the country’s most popular sports destination

In celebration of this year’s sporting events, which include next weekend’s vintage cycle race, L’Eroica, and the 2015 Rugby World Cup, the national tourist board is on a quest to find the country’s top sporting destination, and has asked the public to send in their own nominations.

By submitting an image of their “home of sport” – be it Headingley or a hidden gem of a village cricket green – sports fans will help decide the jewel in England’s sporting crown, no mean feat in a country that is world-renowned for its sporting heritage.

VisitEngland’s Chief Executive, James Berresford, says: “As the birthplace of rugby, football, cricket, punting and the modern Olympic Games, the home of iconic venues such as Old Trafford, Wimbledon and Aintree, and the host to world-class sporting events – Henley Royal Regatta and the Americas Cup, to name just two.”

“England’s sporting heritage is something that truly sets us apart from other destinations. Additionally, our green and pleasant land provides jaw-dropping backdrops to a whole host of popular pursuits, from hiking and running to abseiling and coasteering, making the search literally country-wide.”

To help find England’s sporting capital, simply upload a picture of your own home of sport to Twitter or Instagram using the hashtag #HomeOfSport with a snappy  140 characters, sentence on where you are, and why it’s the best sporting destination in England.

Approved nominations will appear on a national sports wall at www.englandhomeofsport.com and will be entered into a prize draw to win a selection of sporting experiences.

Entries open today, 10 June, and close at midnight on 31 August 2015, after which an expert panel will work through the nominations to establish a shortlist of sporting hubs.

The shortlist will open to public vote on 16 September, with the destination that receives the highest number of votes announced as England’s Home of Sport on 23 October.

Criteria for the winning destination will include: breadth of sporting experiences, diverse and beautiful backdrops and interesting sports trivia or claims to fame.

Faster charging lithium batteries could be on the way