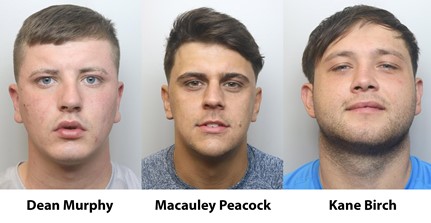 Manchester criminals who were hiding out in a hotel in Warrington were caught by police as they took a dip in a hot tub, shortly before officers discovered a loaded gun in their room.

On the 25th June police acted on information that 23-year-old Kane Birch, from Ainsbrook Avenue, was at the Village Hotel on Centre Park Square.

When officers arrived they found Birch with 24-year-old Macauley Peacock, of Kilmaine Avenue, Blackley, getting out of the hot tub before being quickly detained in the swimming pool area.

Officers established false names had been provided to book into one of the hotel rooms where they found a third man, 20-year-old Dean Murphy, from Manchester, asleep in the double bed.

Following an extensive search of the room, officers seized a black bag on the windowsill which contained a loaded Glock pistol. They also discovered an encrypted mobile phone and a key to a stolen Audi vehicle. Encrypted devices can often be used by organised crime groups to communicate with each other.

Peacock and Murphy were today sentenced at Chester Crown Court to a total of 22 years behind bars after they both admitted being in possession of a firearm.

Birch, the primary target and the reason why police had attended the hotel, was wanted by officers as part of an undercover operation by Cheshire Police’s Serious and Organised Crime Unit (SOCU).

At a previous court hearing Birch was told he will serve four years for conspiracy to supply crack cocaine and heroin after he had a significant role in orchestrating a county lines network to supply class A drugs from Manchester to local users in Macclesfield.

Peacock, who will serve 14 years in prison – five years for being in possession of a firearm and nine years for arson with intent to endanger life – was found with £800 in cash, a fake Rolex watch and a key to a black Volkswagen Golf on the hotel’s car park, which was stolen.

CCTV footage showed Birch and Peacock immediately climb out of the hot tub as soon as they saw officers come into the spa area and heading directly towards them.

The judge sentenced Murphy to eight years – five years for being in possession of a firearm and three years for heroin and crack cocaine offences. A search by officers also revealed he had two mobile phones, £165 in cash, a car key to a stolen Jaguar and a passport belonging to another person who was not at the hotel.

On sentencing Peacock, Judge Simon Berkson deemed him to be a ‘dangerous offender’ and ordered him to serve a minimum of two thirds of his arson sentence.

After the sentencing Detective Chief Inspector Mike Evans said: “This is yet another example of people travelling into Cheshire to inflict harm on our communities thinking they can get away with it – but my message is that we will relentlessly pursue them to ensure they pay for their crimes.

“These men knew they were wanted by police yet they naively believed by hiding out in a hotel they would avoid detection – they were proved wrong. We also recovered a loaded gun in what is a significant step in our fight against organised crime and has no doubt saved lives.”