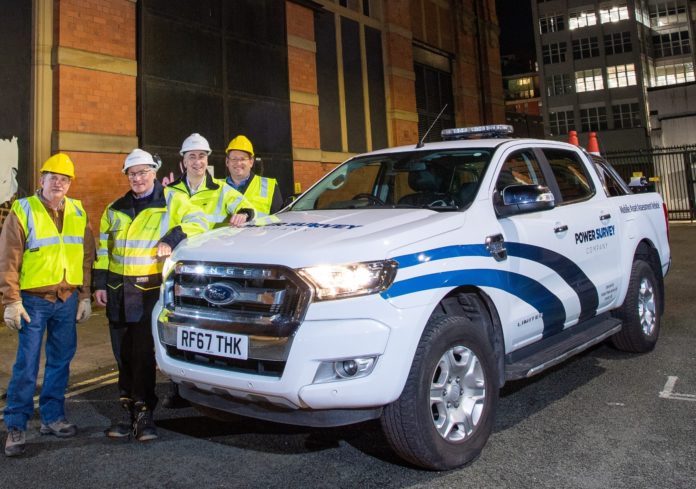 A high-tech new vehicle packed with equipment to detect even small, underground power leaks is being trialled in the north west.

The new vehicle trawling the streets has a sophisticated electric sensor that scans underground power cables to help make the region’s electricity network even more efficient.

Low voltage cables are typically used to connect the electricity supply to homes and small businesses, and street furniture like bus stops and streetlights.

If damaged, those cables can effectively ‘leak’ electricity, increasing the chance of power cuts and making the system less efficient.

Finding and fixing small faults helps save energy that’s being wasted, much like water dripping from a leaky pipe, and will ultimately help to cut customers’ bills and the region’s carbon emissions.

The technology, which works like an X-ray to let engineers see underground, is being trialled by Electricity North West in Manchester city centre and surrounding urban areas.

The vehicle drives at speeds of up to 25mph and can detect faults up to 10m either side of the vehicle, allowing it to check the majority of low voltage cables routed under the region’s road network.

In doing so, the new technology makes leaks much easier and cheaper to spot. Electricity North West’s network consists of around 44,000km of underground cables serving the region.

Ian Povey, strategic planning manager at Electricity North West, said: “Energy leaking from a cable is no different to water leaking from plumbing.

“Faults like this can often be caused by damage to underground cables during construction work, road traffic accidents and just old age.

The vehicle is currently undergoing a four-week trial, during which it should cover around 300 miles of Manchester’s roads. If successful, the vehicle could be used to cover the underground network in other areas of the North West.