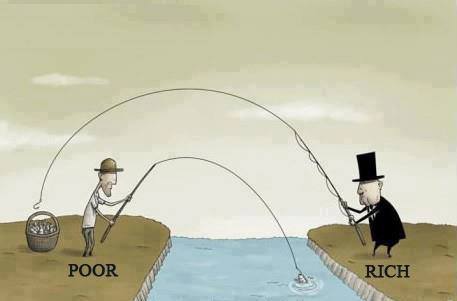 The government is providing more financial support for the richest 20% of households than the poorest 20% says a new report from the Fabian Society.

The analysis has been published to mark the start of the 2019/20 tax year shows how Conservative policies on tax allowances and social security have created a tax and benefit system that provides as much help to rich as poor households.

The report finds that working couples now receive much more financial support from the government in tax allowances than the minimum social security available to non-working couples.

In the 2019/20 tax year (starting on Saturday 6th April) a couple who both work full time will benefit from tax-free allowances worth more than £7,000, while the minimum level of universal credit for a couple without work will be less than £6,000.

The UK-wide cost of tax-free allowances for the exchequer was £136bn in the 2018/19 fiscal year, a rise of 43 per cent since 2012/13 in cash terms. By comparison the government spent £94bn on social security for working-age adults and children in Great Britain, a figure that has fallen 0.3 per cent since 2012/13.

“The start of the new tax year sees the completion of an extraordinary nine-year transition in UK tax and benefits policy, where the income tax personal allowance has soared while working-age benefits have been slashed.

The government says that cuts to social security are a regrettable consequence of austerity, but almost half the savings since 2012 have been used to raise tax allowances not reduce the deficit. Politicians should promise to freeze tax-free allowances for at least five years and plough the money back into rescuing social security.”