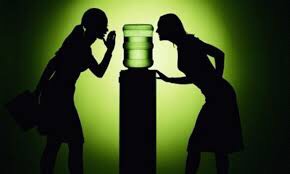 Gossiping at work can damage morale and make workers more cynical, possibly lowering productivity in around a sixth of all workers, research from The University of Salford has suggested.
Gossip is a well-known phenomenon in workplaces across the world, with ‘water cooler’ moments occurring in most office or factory environments. It is often defined as an informal, casual conversation about others not involved in the conversation, typically involving details that are not confirmed as being true.

Previous studies have found that up to two thirds of work chats are about people who are not involved in the conversation, in other words gossip, but the impact of this has not previously been studied in depth. Many may see it as benign, or even helping to bond teams together. But this new research brings that into question and the results may make worrying reading for managers.

In a paper published in the peer review journal International Journal of Human Resource Management, a team from the University of Salford has found that job-related gossip leads to negative implications in many workplaces.
For the study the team analysed survey data from 362 employees from 26 businesses across a range of industries. The team identified two types of gossip, one not work related actually was found to cause no harm to productivity, whereas gossip about work-related matters caused increases in cynicism. They found that more than 52% of the employees engaged with job related gossip, while 45% engaged with non-job related gossip. So negative gossip that could impact on productivity is more prevalent in the workplace.
About 33% of the people who engage with the negative job related gossip were found to have cynical behaviour against their organisation and colleagues. This means up to one sixth or 16% of employees could be having their performance affected by gossip at work.

Kirk Chang, Professor of Human Resources management at the University of Salford, and one of the authors of the study, said: “Virtually all workers engage in gossip at one time or another but surprisingly it has not been subject to much study.
“Our work found a strong link between the level of gossip in a workplace and the level of employee cynicism. You might think that gossip about non work matters might harm productivity, but we found that the opposite. It was gossip about job-related matters that has the biggest impact, while gossip about non-work related things had no impact.

“I would advise managers to be cautious about gossip in the workplace as we found it can cause cynical behaviour among employees and it is clear that that can have damaging effect on morale and therefore productivity.”

A message of peace and love from Pope Francis

Employees move off furlough and spending is up as restrictions ease

Collision hotspots for migrating birds are revealed in a new study