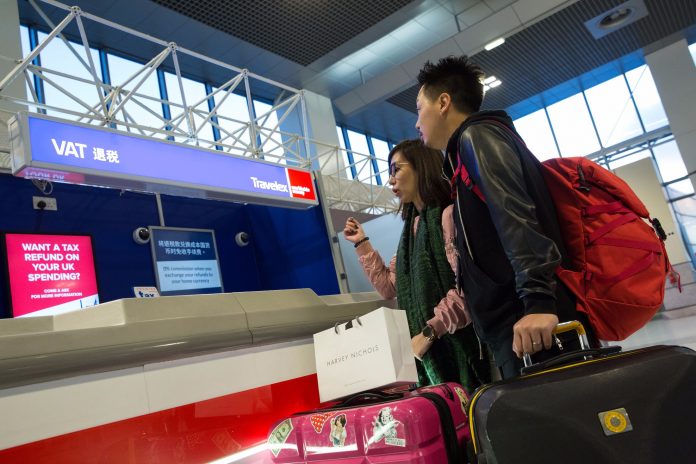 Tills will be ringing across the North West, with more than twenty-two thousand Far East visitors due to jet in on direct flights from both Beijing and Hong Kong during December.

Retailers say they are bracing themselves for their highest sales volumes from Chinese tourists, who are also attracted to the North by high profile Premier League fixtures (including the Manchester derby) and the Christmas Markets.

And in preparation, stores have been training staff in Mandarin and creating special sales promotions.

Clara Kwan and Jeff Tong, 36, arrived at Manchester Airport on a Cathay Pacific flight from Hong Kong this week. The couple are visiting the UK on their honeymoon and said that thanks to a direct service, they have decided to spend four days in the North West before heading to London

During that time, they will take in a Liverpool fixture, as well as visiting the region’s designer stores.

Clara said: “We are here on honeymoon and because there is a direct flight, we decided to do three or four days in Manchester, before going on to London. It means we can go to a Liverpool game and, of course, do plenty of shopping in the North West.”

From 1st December Cathay Pacific will be increase its direct service to Hong Kong to a daily flight. During the winter months Hainan Airlines operate a three-a-week service direct to Beijing, which goes daily during the summer months.

The anticipated boost comes after a pioneering report revealed that the Far East connections are delivering a significant economic reward, or ‘China Dividend’, to the Northern Powerhouse.

The study, on the Beijing route’s one year of service, is the most comprehensive analysis ever undertaken into the economic and social impact of a brand new direct, long haul route between two countries. It has revealed that the Manchester-Beijing air route has driven a significant increase in exports, inward investment, and international student numbers into the North.

Andrew Cowan, CEO of Manchester Airport, said: “The new Beijing route from Manchester is the perfect demonstration of how direct long-haul flights bring significant benefits to the whole of the North by connecting it directly to the world economy.

“The China Dividend report revealed that the new route has delivered a huge boost to the visitor economy in the North, with thousands of visitors arriving into Manchester Airport every month.

“We know the region has an array of excellent retail centres, coupled with world class sporting and cultural attractions, and they are certainly proving popular with the Chinese passengers travelling on our two direct services.”

At Manchester Airport, staff have also been trained in Mandarin as part of the airport’s onsite education academy. Since 2015 201 people have taken the course, which trains in Mandarin plus Chinese etiquette and culture. This year alone 47 course participants have found employment within the airport.

Graham Brady, MP, said: “This route has stimulated huge demand for travel between China and the UK and in doing so has delivered a wide range of benefits to the Northern economy, including significantly increasing exports, inward investment and tourism.

“The scale of impact clearly illustrates just how beneficial having strong links with high growth markets can be and why Government should be doing everything it can to further improve  connectivity between the North and the world.”

New long-haul routes mark an exciting May for Manchester Airport