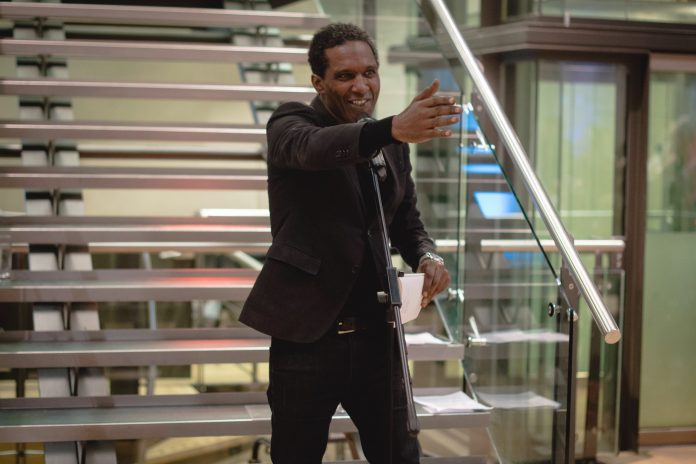 At last nights packed announcement event at Manchester Art Gallery, the internationally-renowned Performance Poet, Writer and broadcaster, and Chancellor of the The University of Manchester, Lemn Sissay MBE was revealed as the newest Patron of charity Manchester Histories at an event to announce the 2018 Manchester Histories Festival.

Unique amongst histories festivals in the UK for working in collaborative partnerships with organisations, communities, individuals; the Greater-Manchester wide biennial festival returns for its 5th instalment from 7-11 June 2018 with the theme protest, democracy and freedom of speech, and an all new Festival format.

Chancellor of The University of Manchester, Lemn Sissay was appointed artist-in-residence at the Southbank Centre, he was the official poet of the 2012 London Olympics, has worked with the British Council, is a patron of the Letterbox Club, supporting children in care, and is a fellow of the Foundling Museum.The programme is managed by BookTrust in partnership with the University of Leicester.

Lemn performed a specially commissioned poem “Listening Post” at the National Commemoration of the Battle of the Somme on July 1st at Heaton Park, Manchester.  In 2013 Sissay founded The Christmas Dinner for care leavers between the ages of 18-25 and with the mission that no care leaver should be alone on Christmas Day.

Born in England, of an Ethiopian mother, who wanted Lemn temporarily cared for while she completed her studies, he was though immediately fostered and remained with a family until he was 12, at which age he was placed in a children’s home. At 18 he was given his birth certificate (a legal requirement) and began ‘in that moment’ his search for ‘home’.

A journey traced on the programme Homecoming for BBC Radio 4 (first broadcast May 2015) which was recorded at the Ghion Hotel, in Addis Ababa, where he went to meet with social anthropologist academic Richard Pankhurst, the grandson of Sylvia Pankhurst. In 1956 Sylvia Pankhurst moved to Addis Ababa at Haile Selassie’s invitation with her son, Richard.  Sylvia Pankhurst had a deep affection for Ethiopia and and is buried there. It is in this programme he would conclude “I am proud that everything I know about myself happened in Manchester”.

When Sissay was 18 years old he moved from Atherton to the city of Manchester. At 19 he was a Literature Development Worker at Commonword, a community publishing cooperative in Manchester.  One of Sissay’s poems is embedded into the stones of Tib Street in the city’s Northern Quarter.

Manchester Histories is a charity with the purpose of transforming lives through histories and heritage by working in collaborative partnerships with communities, individuals and organisations across Greater Manchester.

Manchester Histories Chief Executive, Karen Shannon said: We are honoured to have Lemn on board, supporting and advocating the work of Manchester Histories. Lemn has the magic of being able to tell stories, he brings to life, gives a voice to sometimes hidden or invisible stories, something that Manchester Histories is passionate about. This is priceless, and we can’t wait to start our journey with Lemn, working together to ensure that we continue to transform people’s lives through histories and heritage. Indeed, there is only one Lemn Sissay in the world!

At the event Manchester Histories also welcomed Manchester-based electronic music promoters, Annex Agency and Project 13 who presented DJ’s Acre and Afrodeutsche with a taster of work they will be producing for MHF2018, part of a whole day revealing Manchester’s many and some lesser known music  histories.

Artist Lauren Sagarwhose new work The March of the Artists is inspired by the 1817 March of the Blanketeers – when around 5,000 Lancashire weavers set off from Manchester to London to petition the Prince Regent over the desperate economic hardship faced by the textile industry in Lancashire.

The Blanketeers formed part of a series of protests and calls for reform that culminated in the Peterloo massacre and the theatrical piece, The March of the Artists will form part of a whole Day of Debating for the 2018 Festival.

The festival will conclude with the opening night of Diamond by avant-garde cabaret performance  artist, singer, actor, comedian and film director, David Hoyle at HOME. Diamond explores LGBT history spanning the 60-year period from 1957 to 2017 through the personal biography of Hoyle.

Weaving together intimate personal accounts and landmark events, the show charts David’s rise from gay adolescent in Blackpool in the north of England, to famous Channel 4 anti-drag queen cult phenomena.

Submissions for everyone to part of Manchester Histories Festival, The Manchester Celebration Day, and Soapbox will go live at the end of November.