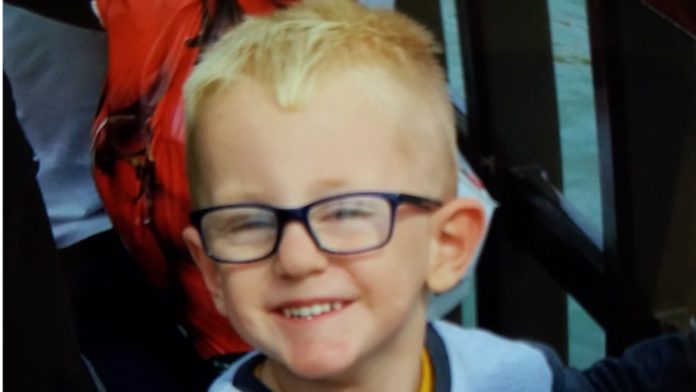 A teen driver has been jailed after hitting a toddler with such force he was thrown seventeen metres across a Leigh car park back in October.

The 16-year-old,who cannot be named for legal reasons,left three-year-old Leo Durrington fighting for his life after the force of the stolen van he was driving ripped the child from his mother’s grasp.

He was today  sentenced to one year in a Young Offenders’ Institute at Wigan Youth Court after pleading guilty to causing serious injury by dangerous driving and failing to stop. He also admitted handling stolen goods, driving without a licence and driving without insurance.

His 15-year-old friend was handed a 12-month referral order for allowing himself to be in the stolen van.

A stolen white Ford Transit triggered the police’s r in-car automatic number plate recognition system.They attempted to stop the van – which had been reported stolen from Abram the previous day,on Wigan Road in Leigh but the teenager wouldn’t stop and during a brief police pursuit, he lost control of the van at a mini roundabout, at the junction of Leigh Road and Wigan Road.

The van then mounted the pavement and hit little Leo with such a force he was ripped from his mother’s hand and thrown approximately 17 metres into a nearby car park.

Instead of stopping, the 16-year-old drove off along Wigan Road, leaving Leo fighting for his life on the roadside.

The brave toddler suffered multiple extensive injuries and the officers immediately stopped at the scene and administered first aid before he was rushed to hospital in a critical condition.

The vehicle was later recovered by officers on St John’s Street in Abram where the duo abandoned it.

Following extensive public appeals, the 16-year-old driver was located and subsequently arrested. The 15-year-old passenger handed himself in at a local police station a couple of hours later that evening.

During interview, the eldest teen admitted to purchasing the stolen van for £300 the day before the collision.

In line with GMP policy, the incident was referred to the Independent Office for Police Conduct.

Police Sergeant Lee Westhead of GMP’s Serious Collision Investigation Unit, said: “The devastation caused is all too apparent. Leo’s family has been left distraught by what happened that day and I am glad that we were able to identify these teenagers so quickly.

“They showed no regard for anyone other than themselves. They left Leo lying in the road without a seconds thought.

“Thankfully the prompt medical attention given to Leo at the scene and the incredible treatment from the dedicated doctors, nurses and staff at Manchester Children’s Hospital, Leo is now recovering in hospital with his devoted family by his bedside.

“On behalf of Leo’s family I’d like to thank the community for their support and well wishes since this incident and the thoughts of everyone at GMP are very much with them as he recovers in hospital.”