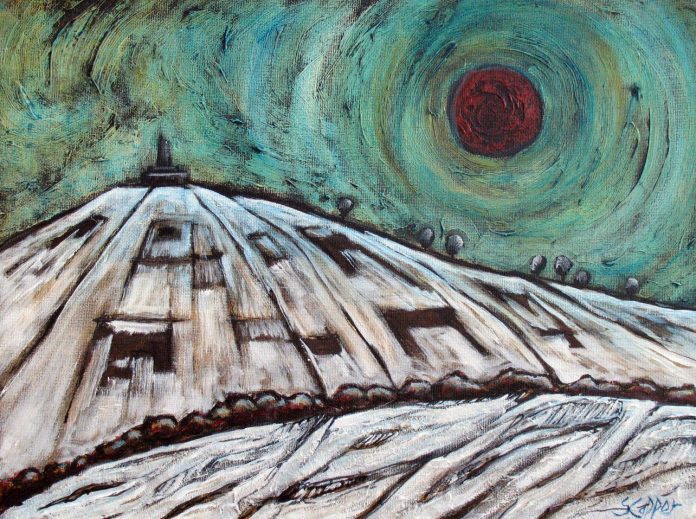 They say life begins at 50. And for artist Steve Capper, everything came into focus when he took early retirement at 52.

Spending 30 years as a secondary school art teacher, whilst fathering two children and running a commercial pottery, didn’t leave much time for painting.

“I would have rather come home and dug a hole,” he remembers. “I was worn out. I loved teaching, but I didn’t have anything left at the end of each day.”

These days Steve, 74, paints most days in the conservatory of the home he shares with his wife in Delph, Oldham. He is currently preparing for a solo show at Gateway Gallery in Hale, Trafford.

Steve’s work, which is held in numerous private collections, encompasses both landscapes and still life. But whichever genre he is working within, his images reveal the same focus on shape, pattern, colour and texture. Clouds, trees, buildings and hills are reduced to simplified and abstracted forms to be repeated and played with.

He says: “My landscapes aren’t accurate representations of actual locations; they are composites and I aim to convey the feeling of a place rather than simply recreate it. The shapes and colours however are definitely inspired by my Pennine surroundings.

“I sold a painting in Yorkshire recently and the buyer said they immediately recognised it as Saddleworth.”

Growing up in Audenshaw and Droyslden in the post-WWII period, Steve first began painting when he was accepted into the Manchester High School of Art in 1955.

“We were very lucky in Manchester at that time,” he says. “I passed the eleven plus, but didn’t get a good enough mark for grammar school. So off I went to the School of Art, not yet knowing that I was about to be educated by some of the best teachers in the country.

“Our music teacher was a concert pianist, our English teacher a dramatist and every available surface was covered with painting, drawing and sculpture. I couldn’t help but be inspired and went on to art college and later university”

Steve progressed to Bretton Hall in 1968, where he graduated in fine art. “We were a charmed generation,” he says, “and our full grants allowed us to study what we wanted. My parents were very proud of me and didn’t attempt to steer me away from art”.

On graduating, Steve secured an art teaching post at Saddleworth School. He rose to head of faculty and remained there until he took early retirement in 1996.

Despite spending 30 years away from his easel, Steve has no regrets.

“It was a different phase of my life,” he says. “I got a lot out of teaching and was very happy most of the time.

“I didn’t plan to retire at 52, but when the opportunity came up, I grabbed it.

“I consider myself very fortunate to have spent the last two decades creating my own body of work.
Susan Eyres, director of the Gateway Gallery, which specialises in modern British art, says: “Steve sits firmly in the tradition of northern school expressionism, but his bold and contemporary use of colour, and willingness to experiment with texture, places him at the forefront of those who are taking northern art in a new direction.

“He is following in the footsteps of William Ralph Turner, Vlaminck and Soutine, to distance himself from a purely realist representation of the industrial north and its surrounding landscape.”

Sing with the Chorus of Opera North at The Lowry

Richard and Judy to return to Channel 4

How to save money with nespresso compatible capsules