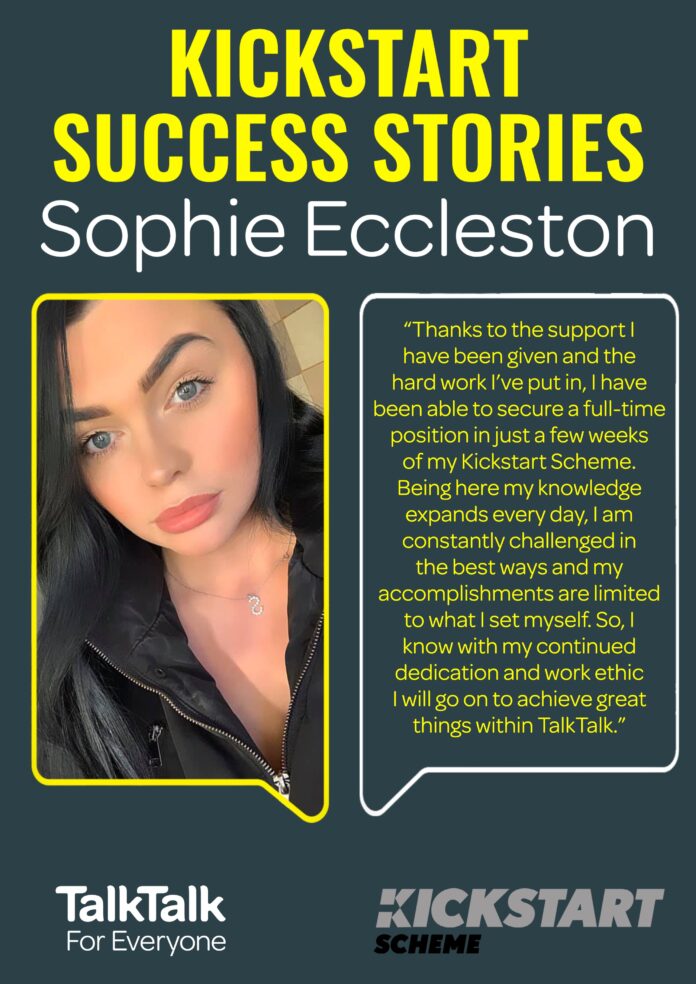 Salford-based connectivity provider, TalkTalk, is set to make a second cohort of positions available at its North West HQ, as part of the Kickstart Scheme.

The Kickstart scheme, launched last year by the UK Government, provides funding for employers to create six-month work placements for 16- to 24-year-olds in receipt of Universal Credit.

TalkTalk’s move follows the success of the first intake of ‘Kickstarters’ earlier this year, which enabled them to create opportunities for almost 50 young people. And the success is already evident with one person having been made permanent within a month of joining the business.

Sophie Eccleston aged 24 from Eccles joined TalkTalk as part of the first Kickstart integration in April this year. Through the scheme, she secured a support role in the Enterprise Operations team. Just weeks into her placement, Sophie was offered a full-time role and became a permanent member of the team in May.

Sophie’s new role is a Delivery Co-ordinator in the data solutions team.

Sophie said, “I am profoundly grateful for the Kickstart Scheme and for the opportunity I have been given at TalkTalk. It has really boosted my confidence – and thanks to the support I have been given, I was able to secure a long-term position in just a few weeks. Every single day I am facing fresh challenges and learning new skills at TalkTalk and I am proud of myself for stepping outside of my comfort zone.

TalkTalk is a major company and a brilliant employer. I am surrounded by a lovely team who have provided an amazing springboard to take my career forward. I would encourage anyone considering joining the Kickstart scheme to do so immediately – you won’t look back!”

Daniel Kasmir, Chief People and Procurement Officer at TalkTalk added, “Having impressed from the start, we are so pleased to welcome Sophie to TalkTalk on a permanent basis. She is dedicated, hard-working and demonstrates the values we hold close as a business.

“The Kickstart scheme has provided a major opportunity for young people to embark on new careers, learn skills and integrate into businesses during unprecedented times.”

In addition to offering real work experience to enhance the Kickstarters’ CVs, TalkTalk is hosting a variety of development workshops and offering full employability support.

Headquartered in Salford, TalkTalk has welcomed 50 employees from across the North West in April as part of the Government-backed scheme with a further 60 roles due to go live later this year.

MP appeals to Football League to save Bury