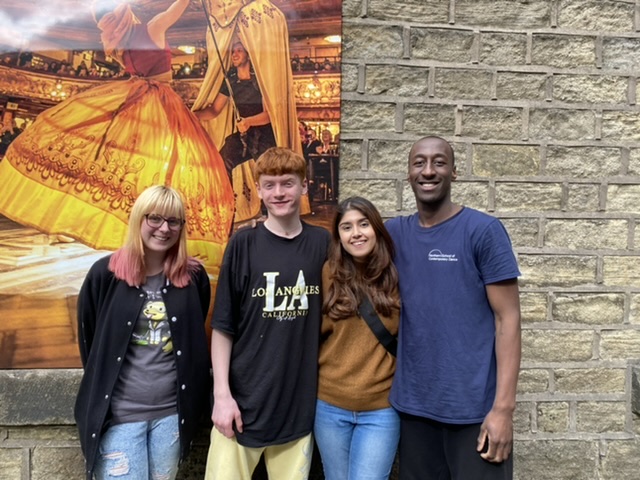 Talented young performers from across Greater Manchester will be heading to London to take part in the biggest street celebration in decades, which features stars from Ed Sheeran to Sir Cliff Richard and Basil Brush.

Two hundred dancers, drummers and flag bearers from every borough are currently rehearsing for the Queen’s Platinum Jubilee Pageant, a spectacular parade taking place in London on Sunday 5 June.

Greater Manchester carnival arts organisation Global Grooves, the only northern group to produce a section of the Royal celebrations, put out a call for participants in March.

Catherine Rhodes, from Hindley, Wigan, plays drums at grade 8 level and is one of those who will travel to London to perform as part of the Pageant. Currently studying for three science A-levels at Bolton College, Catherine is a well known local musician, and a member of a number of local young people’s music groups, including Wigan Youth Jazz Orchestra, Wigan Youth Orchestra and Greater Manchester Youth Brass Band.

She said: “I’m really excited to learn a new style of music as I love trying new styles and expanding my musical knowledge and skills, and am really looking forward to performing in the pageant.”

Benedict Kayonda, 15, a student at St Joseph’s RC High School, Horwich, has been chosen to dance in Global Grooves’ parade.

She said: “I’ve loved to dance my whole life and began officially training and going to classes almost a year ago. I firstly danced in a more contemporary style, then moved to a more African style and then fell in love with commercial and street style dancing.

“At the Pageant, I will be one of the fan dancers and I will be representing the whole continent of Africa.

“I’m truly looking forward to dancing for the Queen’s Jubilee and I believe that it will be an experience of a lifetime. I have never done anything like this before and I am so thankful for the opportunity”.

Benedict’s older brother, Elysee, 20, is also taking part. A student at the Northern School of Contemporary Dance in Leeds, he was born in Kinshasa, DRC, moving to Little Lever at the age of four.

Elysee, who speaks three languages, said: “It will be an amazing time for us to come together and help celebrate Queen Elizabeth’s Platinum Jubilee.

“To take part and represent Bolton is a huge honour because Bolton has a lot of talent and is a beautiful place.”

Drummer Farheen Saloojee, 24, is from Stretford, and is a teacher. She has been playing percussion for over 13 years and co-founded young people’s music group Jubacana.

She said: “Performing in the Jubilee is a fantastic opportunity to show the diversity of music and celebrate the unity of different cultures coming together; cultures we are proud to represent in the UK.”

And Ashton’s Nicholas Lee, 16, a student at Wright Robinson College and member of Company Chameleon senior youth dance company, hopes to one day perform at Sadler’s Wells dance theatre in London. He says that dancing in the Pageant is a great start.

Nicholas said: “I knew I had to get involved with the Pageant because I live to dance and one of my biggest dreams has always been to perform in London.

“Simply being in London, it’s been a massive dream of mine for so long but growing up we could never really afford it and now the Pageant is allowing me to do this but in the most stylish way possible – performing for the world!

“So to be able to do this whilst representing Tameside is incredible.”

Freya Bennett-Nielsen, producer, Global Grooves, said: “Our carnival parade celebrates Greater Manchester in all of its wonderful diversity and shines a light on the cultural exchanges that take place when people collaborate with others who have vastly different experiences, ideas and ways of living.

“We are proud to be taking some of Greater Manchester’s finest young performers down to London and absolutely know they will do us proud in front of the eyes of the world.”

Kirsty Connell, network coordinator, Greater Manchester Arts, which is supporting Global Grooves to take the young people to London, said: “The Queen’s Platinum Jubilee Pageant offers a fantastic opportunity to showcase some of the talent we have here in Greater Manchester.

“We’re really pleased to be able to support Global Grooves in ensuring that all of Greater Manchester is represented.”