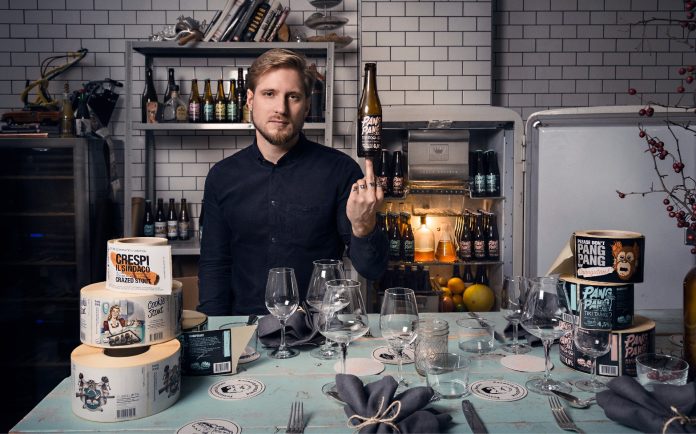 A Cohiba cigar-smoked Imperial Stout brewed using the world’s biggest bong and a 10% Pale Ale made specifically to be drunk in the shower are just two of seven incredibly unique beers from Sweden’s one-off Pang Pang brewery available during their Scandinavian-style Tap Takeover at BrewDog Manchester.

Pouring from Friday 15th December at BrewDog, 35 Peter St, Manchester, M2 5BG, Pang Pang which translates as Bang Bang will have a 7-strong range of its thought-provoking and tongue-titillating brews available for the first time in the city.

“For me Brewdog is the Zlatan Ibrahimović of the craft beer world so it’s great to have our beers flowing from their taps in Manchester, a city where the big man has made a huge impression.  In their respective fields, they didn’t just raise the bar, they re-wrote the rule book, caused chaos and changed things forever.  We’re hoping to do the same so for me BrewDog Manchester is the perfect place to unleash our beers.”

Imported by Manchester drinks importer Morgenrot, the beers on show include:

The entry gate to Pang Pang beers. A single hopped ‘Simcoe’ pale ale. Light, fresh and delicious with a wonderful aromatic nose of melon and peaches.

Flamingo-go IPA (6% abv)
A vibrant mango-nosed beauty. A sessionable IPA without punching too hard on the hops, its balanced nicely with plenty of tropical fruits and a tangy bitter finish.

Golden Glock Fruit IPA (6% abv)
A crazy Fruit IPA containing every fruit you can name in five minutes. All bunged into the fermenter and left there until it’s ready.

Gaffa Grey IPA (5.8% abv) – An IPA brewed with Earl Grey tea, and just enough roasted malts to support the tea, without interfering with the flavours and aromas of the hops. Gaffa is brewed with quite a lot of bergamot juice and zest, which gives it a refreshing acidity.

This hoppy citra IPA is all you need to get through the apocalypse. This, and duct tape, a Ruger 10/22, paracord, loose morals, a tight relationship with Bear Grylls, a Cessna 172, and a remote cabin.

With a reputation for pushing brewing boundaries, Pang Pang hit global fame after brewing this 10% double pale ale made specifically made to be enjoyed in the shower.

A Cohiba cigar infused fat and oily imperial stout, Bong Water is made by turning the 1000 litre fermenter into a large bong and smoking cigars through the beer to impart the flavour of fine tobacco.

A pop-up Aperol Spritz bar is coming to Manchester