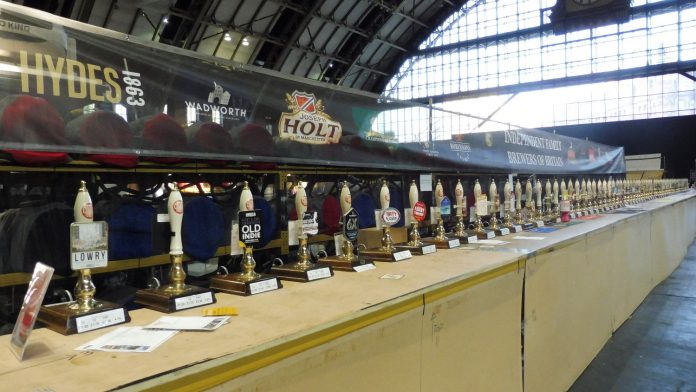 Innovative brewers from across the country are set to stagger drinkers with a bevy of new and collaboration beers launching at the North’s biggest beer festival.

Now in its fifth year, the Manchester Beer and Cider Festival has developed a reputation for curating unique pairings of brewers to create new beers. The festival, which returns to Manchester Central at the end of the month, also provides some brewers with a prestigious venue to launch new ales. And it’s a perfect opportunity for those following ‘Tryanuary’ – the antidote to ‘Dry January’ – where drinkers are encouraged to try different beers, pubs and venues to support the UK brewing industry in what is usually a difficult month for the trade.

Macclesfield’s Red Willow hosted a visit from Elusive Brewing from Berkshire to brew an American Brown Ale, generously hopped with Cascade and Columbus, but some local brewers have travelled far and wide to give birth to new collaborations.

Manchester’s Runaway went to Newcastle upon Tyne to forge an alliance with Newburn’s Box Social; expect a dry double-hopped Nelson and Apricot IPA, ‘Metanoia’. And Alphabet set off from its Piccadilly railway arch on a 490-mile round trip to microbrewery Vibrant Forest in Hampshire. Their beer is a 5.4% ABV Dunkle Weiss with exotic citrus notes from the hops.

Another well-travelled brewer is Pig and Porter of Tunbridge Wells. Its destination was Peterborough’s Bexar County brewery where the heavyweight ‘That’s Mintal’ a peppermint porter (8.2% ABV) was conceived.

North Wales brewer Cwrw Iâl travelled to New Mills to collaborate with Torrside. Their effort really took the biscuit – ‘Viennese Whirl’ promises vanilla and raspberry to create a biscuit in a beer. A collaboration of a different kind saw Manchester’s Track brewery work with the three Font bars in the city to make ‘Altered State – Orange Acid IPA’ . The 5.3% ABV ale features Amarillo and Eldorado hops and orange zest and will be served as a keg beer.

Festival beer orderer John O’Donnell said: “Manchester is the modern beer capital of the UK with a range of brewers that are the envy of other cities. We are pleased that we’ve been able to spread some Mancunian beer love to brewers the length of the country – we have some exciting beers to try.”

Meanwhile, some of the other festival organising team volunteered to assist brewers to create some special edition beers available for the first time at the event. Lancashire brewers Rivington are contributing a new porter, ‘ You Have To Call Me Nighthawk’, and Altrincham’s Stubborn Mule have brewed a low ABV table beer, ‘Little Napoleon’. A new brown ale will debut, courtesy of Brewsmith in Ramsbottom (4.2%), and Maghull (Liverpool) brewer Neptune has a new best bitter named King Of The Sea’ (4.7%).

Middleton brewer J W Lees has been a long-time supporter of the festival and has chosen to launch a new beer there. The stout is an eagerly-anticipated part of a shake-up of the family brewer’s core range, the second new beer after a craft lager appeared last autumn.

Bury’s Silver Street crowdsourced suggestions for its new beer. ‘Good Intentions’, a 5.4% lightly hopped coffee porter has orange and cardamom spice, but, brewed in a small batch, will be a target for those beer tickers who enjoy collecting new ales.

Madonna championed Timothy Taylor’s Landlord as her favourite beer more than a decade ago, dramatically boosting the Keighley brewer’s business. Part of the Taylor Made limited edition range, Poulter’s Porter will debut in the Manchester area at the festival. It is described as a rich, dark, warming ale with hints of coffee, chocolate and liquorice (4.8%).

John continued: “We aim to offer our visitors an unrivalled choice of beers and ciders. From our special collaborations to returning favourites, international beers and our largest ever range of keg beers, with over 750 beers, ciders and perrys we have something for every taste.”

Manchester Beer and Cider Festival runs from Thursday 25th to Saturday 27th January 2018 at Manchester Central. Tickets for entry and special tasting events are on sale at the festival’s website, www.mancbeerfest.uk

Wood Is One: Join the Month Long Party

YO!‘s Chindogu Menu is back by popular demand and heading to Manchester