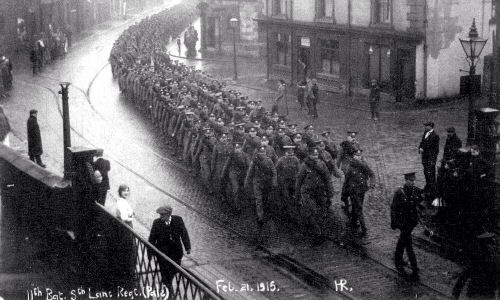 The full behind the scenes story of 3,000 men from St. Helens who fought in the First World War is uncovered in a book being launched this month.

The book tells the story behind the lives of a group of young men from St. Helens who volunteered to serve with the 11th Battalion South Lancashire Regiment – also known as the ‘St. Helens Pals’.

David Risley, a local military historian who manages the Research Support Team within the Faculty of Humanities at The University of Manchester, co-wrote the book with Richard Waring, both of who have family connections to the Pals themselves.

David’s maternal great-grandfathers were in the Pals, Sergeant John Henry Sharratt of ‘B’ Company survived the war but later died in 1920 due to the after-effects of being gassed in 1917. Lance Corporal William Atherton of ‘D’ Company was killed during the same action in which John Davies won the Victoria Cross.

Meanwhile Robert and George Waring, cousins of Richard’s grandfather, served in ‘A’ Company while Richard gained an interest in the War as a child following his father’s stories from his time as a Sergeant in the Cheshire Regiment.

David said: “It is the culmination of four years’ research which took us countless hours of painstaking research, we were fortunate to have received a large chunk of heritage lottery funding.

“This wouldn’t have been possible without helps from locals who helped us to piece together parts of the story.”

He said: “The database contains 3,000 men, augmented by around 2,000 Census records, 800 entries from the Absent Voters List, hundreds of entries from Soldiers Died in the Great War and the Commonwealth War Graves Commission database, as well as over 1,000 Registrar’s records. In addition we’ve managed to find photos for nearly 250 of the men.”

The book is entitled ‘St. Helens Pals: 11th (Service) Battalion South Lancashire Regiment (St. Helens Pioneers)’ and is available from the Family History Society at St. Helens Archive Library on Tuesdays between 5pm and 6.30pm.
If you can’t get to the library then you can get a copy by post. The book is free but postage and packing will cost you £4. Send an email to townshipsfhs@googlemail.com and they’ll let you know the address to send your name, address and cheque to.

Manchester should be the second city says poll