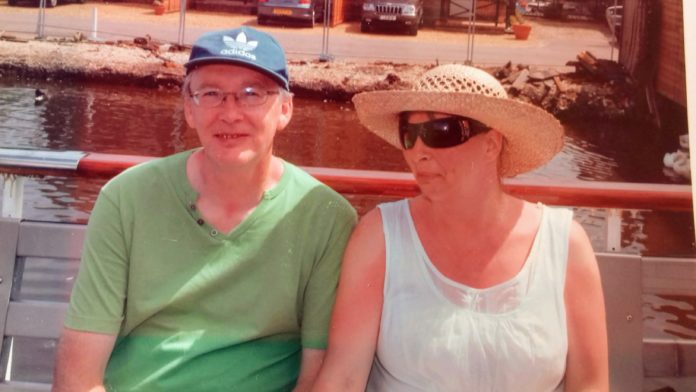 Jeanette’s partner Malcolm was diagnosed with early-onset dementia at just 56 years-old, however Jeanette started seeing symptoms two years prior. After Malcolm’s diagnosis Jeanette became a full-time carer until he was hospitalized and forced to go into a care home.

Jeanette said “Malcolm started forgetting everyday normal things that were part of his routine, he couldn’t tie a tie. When we went away for a relaxing spa weekend together, I knew something was amiss. Swimming in the pool I turned around to look for Malcolm and realized he had forgotten how to swim, he was sinking.

“It was hard to get a diagnosis, the doctor even laughed at me when I suggested Alzheimer’s. But after pushing for a brain scan for a year, we were told just one year later. It hit me like a ton of bricks. I became his full-time carer, but after Malcolm collapsed and went into hospital, I was told he would be better in a care home. I would be at the hospital from 8am to 8pm every day and would go to the care home daily too.

“Malcolm and I were able to go home for meals and out and about whilst he was at the care home, but he started having seizures. The seizures could last 45 minutes and whilst Malcolm could still talk and communicate, he was physically unable to walk.

“Malcolm passed away in November from early onset Alzheimer’s, which he battled for ten years. We had recently seen has favourite singer on Remembrance Sunday, but by that afternoon he had started to struggle. After 19 years of love together, Malcolm was ready to go and passed away in my arms.”

In the UK someone develop dementia every three minutes and across Greater Manchester there are an estimated 30,000 people are living with the condition. This year Jeanette is taking part in the Manchester Memory Walk at Heaton Park on 28 September.

Jeanette added, “I’m doing the Manchester Memory Walk this year for Malcolm, I want to make people aware it’s not just older people who get dementia. Coming to see the research at the University of Manchester has shown me why it’s so important to take part and fundraise, as the research can’t be done without our money.

“On the day Malcolm was diagnosed with dementia he walked around to Stockport’s local Alzheimer’s Society branch, so that he could understand more about what the illness means and what it meant for his future. From that day we were helped so much and we were both so thankful for that.

“I have done the Manchester Memory Walk a few times. I would come back from the walk and put the medal around Malcolm’s neck, I could see that he was always so proud. In his room at the care home Malcolm had a box of memories, after he passed away I looked in the box and there was my Memory Walk medal.

“The Heaton Park walk is amazing, definitely a day you won’t forget. There’s a DJ there who gets us all going, and there are funny costumes, one of which I’ve been roped into wearing this year too! There are two walks, a short one and a long one, either one you do you will be pushed on by the crowd. We are all in the same boat, sharing our experience uniting against dementia.”

Cloudy with a chance of pain