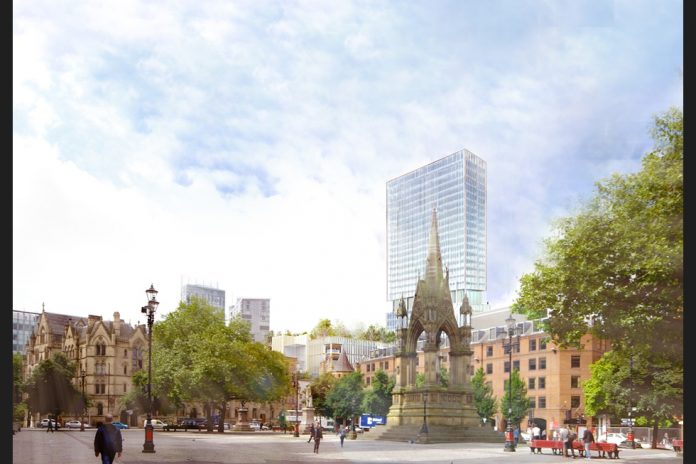 Earlier this week Heritage England once again snubbed the proposed St Michael’s development around Bootle Street in the centre of Manchester due to the “cumulative harm” to nearby listed buildings.

Now another heritage group has joined the foray.

SAVE Britain’s Heritage has submitted major objections to new plans for a 40-storey tower in a central Manchester’s historic core. The planned tower, next to one of the finest Town Halls in England and the central library building, they say,will have a devastating impact on the harmony and splendour of Manchester’s townscape.

SAVE believes the scheme would cause substantial harm to the significance of Manchester’s historic core by compromising the setting and important views of key listed buildings, as well as the setting of the conservation area in which it sits and other protected streets and spaces.

The group cite the fact that within just 250m of the application site there are some 72 listed buildings and nine Conservation Areas, highlighting the sensitivity of this location.

The proposed tower ” would loom over and dominate many of them, notably the Grade I listed Town Hall and Albert Memorial.”

The applicant’s own Environmental Impact Assessment, they add, when assessing the impact of the proposals, states that the “magnitude of change” on the Grade I listed Albert Memorial, Albert Square and Deansgate/Peter Street and St Ann’s Conservation areas will be “large adverse”, with likely “indirect, permanent, long term residual effects”.

In our view this is a Montparnasse Tower scenario – the infamous Paris planning battle of the 1970s, where a 58-storey tower was built in the south of the city, despite major criticism. Two years after its construction city planners banned buildings over 7-storeys in the centre of Paris.

According to the group, The very successful revival of central Manchester has been based on strict planning controls and conservation principles. The big grid blocks largely have a uniformity of scale which gives the city centre a strong cohesive character. The historic character of the central core which makes Manchester so distinctive is at real risk from these proposals.

Last summer saw revised plans for the tower, after the original plans which were criticised by Historic England were put on hold and the scheme’s original architects Make were replaced by Manchester-based Hodder and Partners.

The revised plans saw the Sir Ralph Abercromby pub saved and the retaining of the former Bootle Street police station frontage.The plans now have a single, rather than a double tower which will be two metres lower than the original design and will be located on the western edge of the site away from the town hall.

Henrietta Billings, Director of SAVE, says: “Not only is this highly sensitive, historic location the wrong place for a 40-storey tower, but the bulky design of the lower elements also clash with and overwhelm the buildings the developers claim to be protecting. Manchester City Council can and should use its powers to demand better – and refuse this alarming and destructive proposal.”

Marcus Binney, Executive President of SAVE, says: “Not since the Montparnasse Tower was built in Paris in 1973 has a single tower proposal been so damaging to a great European townscape. The revival of Manchester’s near dormant historic core over the last 30 years into a vibrant city centre full of restored Victorian buildings and well-designed modern ones is an outstanding achievement. It has depended not on flashy iconic buildings but first class local architects who have maintained the muscular grit of the city centre responding to its red brick warehouses, mills and office chambers. Manchester planners must not be allowed to destroy their own finest achievement.”