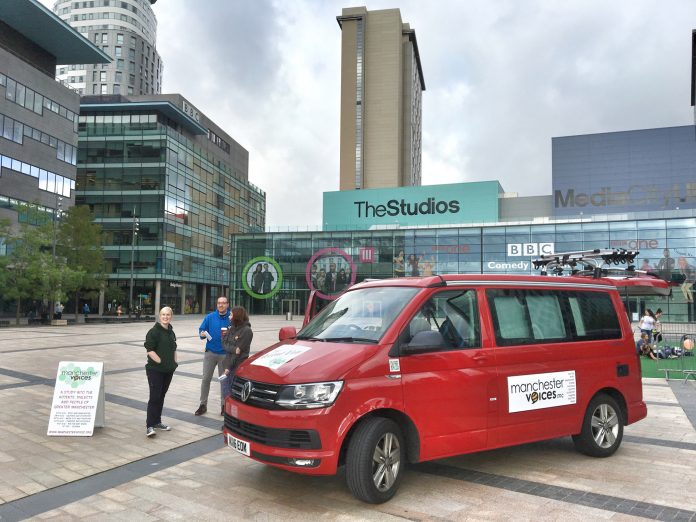 There is no one Greater Manchester dialect, with most of its ten boroughs home to a distinct and proud way of speaking, according to a research project exploring how Mancunians talk.

In fact, whether someone orders a ‘barm’, greets a passer-by with ‘areet’, or describes themselves as ‘skriking’ could also determine how strongly a person identifies with the Greater Manchester region.

Manchester Voices – which is the subject of a new exhibition opening at Manchester Central Library on Thursday 22nd June – is led by two Manchester Metropolitan University academics investigating and celebrating the accents, dialects and people of Greater Manchester.

It looks at the ways in which our use of language makes us who we are and explores perceptions of the way people speak across the region.

Depending on where they live, findings suggest that Greater Manchester residents can feel more affinity to Manchester, Lancashire, Cheshire or Yorkshire, but share a common feeling of being straightforward, down-to-earth northerners.

And while the ‘Manc’ twang most commonly associated with the Gallagher brothers is heard in central Manchester and Salford, many feel it is stereotypical and not reflective of the rich tapestry of voices across the region.

Last summer, sociolinguists Dr Erin Carrie and Dr Rob Drummond from Manchester Metropolitan travelled the entire city-region in their ‘Accent Van’ and recorded over 100 interviews with people on how they speak, their local area, and what it means to be part of Greater Manchester. This even included now Mayor of Greater Manchester Andy Burnham, who they ran into while he was on the campaign trail.

An interactive online ‘dialect map’ has also gathered information from Greater Manchester residents on how people speak pinned to a specific place.

Dr Carrie said: “Our findings show that despite variation in dialect and accent, people in the city-region are bound together by their strong Northern identity.

“The work we have done so far showcases the fascinating range of accents and dialects spoken across the Greater Manchester area and allows us to continue investigating precisely how they differ in terms of pronunciation, words and use of grammar.

“Most people were extremely proud of their linguistic and cultural heritage and we were interested to see how intuitively aware they were of how they use language to represent who they are and where they’re from.”

Visitors to the exhibition will experience an interactive display of the findings of the project so far and can explore a collection of video clips, dialect maps and books relating to local accents and dialects.

The research indicates that Northern boroughs of Greater Manchester identify strongly with the traditional county of Lancashire, north-eastern boroughs express an affinity with Yorkshire, and southern boroughs associate with the county of Cheshire.

There are mixed feelings about the term ‘Greater Manchester’. Many participants feel that it represents their sense of belonging to a larger collective, but some are resistant to its use, seeing it as a purely administrative term. These people tend to identify more with ‘Lancashire’ or simply ‘Manchester’. Overall, there is a strong identification with the working-class, industrial north.

Linguistically, there are some differences from region to region: e.g., ‘barm’ in the central boroughs, ‘lickle’ in Bolton, ‘skriking’ in Oldham, ‘cruckled’ in Rochdale and ‘areet’ in Wigan.

There are also many linguistic features that are shared across the city-region, including the pronunciation of ‘bus’ and ‘bath’, and terms such as ‘angin”, ‘ginnel’ and ‘our kid’.

There is also no sign of these types of language dying out. “Some of our participants highlighted differences between the speech of older and younger generations but this is more likely a sign of local accents and dialects changing and evolving, rather than being lost,” said Dr Carrie.

Dr Drummond added: “What’s particularly clear to us is that there is more than one Greater Manchester dialect, and more than one associated identity. These range from traditional to modern, and everything in between, and have been shaped by each borough’s regional history and cultural icons.

“People had mixed feelings about the use of the term ‘Greater Manchester’, although it is clear that there are many ways of speaking and ways of being that bind people together across the city-region.”