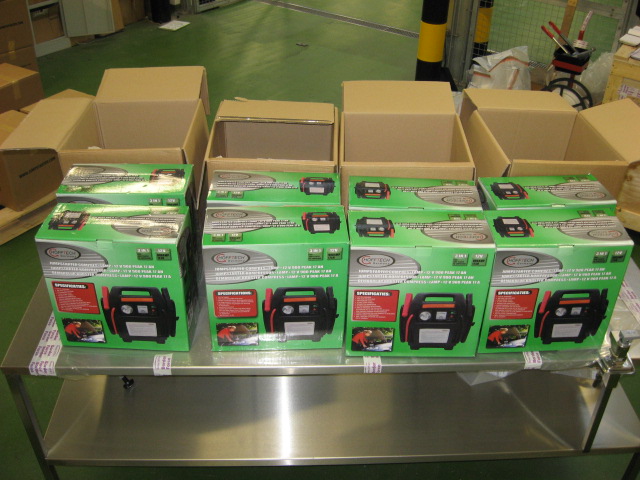 Six Salford men have been jailed after £15million worth of drugs were imported to the UK.

On Monday 2 November 2015, a container arrived at London Gateway Port addressed to Stinson Transport, a company owned by Robert Stinson.

A search of the container revealed 47 kilograms of cocaine concealed in car batteries, with an estimated value of £15,000,000.The Class A concealment was sent by a company recently established in the Dominican Republic.

Further enquiries revealed Farnworth was acting as a conduit between Stinson and Darren Cleary, the head of the organised crime group.

On Sunday 22 November 2015, Jonathan Gregg appointed a night watchman for a company called BST Trading to await the delivery of the consignment to a unit leased by Anthony Seddon in Ormskirk, Lancashire.

Ordered by Cleary, Reece Cole relayed instructions to the rest of the group involved in the delivery.

In the early hours of Monday 23 November, Anthony Seddon arrived at the unit in Lancashire and the pallets of cocaine were unloaded and stored.

Seddon had another unit in Leigh, Wigan under his company A580 Batteries, where he appointed his son Lloyd Seddon as Director. The company was set up purely as a guise to store the car batteries in the unit once the drugs had been removed in an attempt to legitimise the delivery.

At 4.20pm that day, GMP’s Tactical Aid Unit and Dog Unit arrived at a farm in Clifton to execute a search warrant however, officers discovered Cleary, Gregg, Cole and Seddon had fled the farm on their arrival and a search ensued.

A police dog was deployed, which led to the arrest of Lloyd Seddon and Anthony Seddon. Darren Cleary was found hiding in a bush.Cole, Gregg and Farnworth were arrested some time later.

On 25 February 2016, while being interviewed by police, Lloyd Seddon claimed he had no knowledge of the companies involved in the drugs operation and stated he only went to the farm to stroke the animals.He also denied knowledge of any of the other defendants and denied he ran from police but was merely walking across the field.

Today,they have all been jailed for conspiracy to import class A drugs.

Darren Cleary,37, of Windsor Avenue, Clifton, has been jailed for 16 years. His associates Anthony Seddon,51, of Charles Street, Swinton, was jailed for 14 years.

Jonathan Gregg,24, of Ellesmere Street, Swinton, was jailed for 10 years and eight months, and Reece Cole,25, of NFA, was jailed for 12 years and two years for possession with intent to supply class A drugs, which will run concurrently.

They pleaded guilty at an earlier hearing.

Robert Stinson passed away prior to any charges.

Detective Sergeant Ryan Grumbridge of GMP’s Serious and Organised Crime Group, said: “This was a sophisticated operation, which was rapidly unravelled by the investigating officers, preventing the harmful growth of cocaine distribution on the streets of Greater Manchester and its neighbouring areas.

“Today, these men have received sentences that prevent them from causing any further harm and carrying out wrongful actions at the demise of innocent people.”