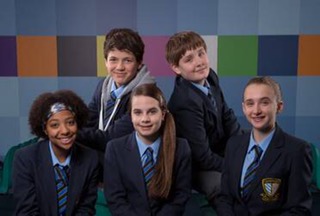 Channel X, one of the UK’s leading comedy and entertainment TV production companies, has begun filming the third series of CBBC award-winning children’s sitcom So Awkward, via their Salford based arm Channel X North. Filming of this third series commenced in June 2016 in Eccles and Bury.
So Awkward is a comedy about three socially awkward friends Lily, Martha and Jas and features a wealth of home grown talent, including actors Clive Rowe (Mr Salford) from Oldham and Alex Carter (Mr Malone) from Greater Manchester. One of the Directors for the series, Ian Curtis, also grew up in Stockport.

Jim Reid, Director of Programmes at Channel X, said: “We love filming the series in the North West as it has a tradition and pedigree in comedy and entertainment, which Channel X are really proud to be a part of. I would go as far to say it’s probably the heartland of comedy in the UK! We set up Channel X North in Manchester during 2006, as a company we’re really keen to encourage and actively support diversity within television so that talented individuals from all walks of life don’t have to rely on luck or living in London to get in to the industry!”

The independent company produces uniquely British content and has worked with the leading comedy talent in the UK for the last three decades, including BBC Four’s BAFTA award-winning Detectorists, BBC Two comedy Hebburn and the fantastically dark Snuff Box. Headed up by Managing Director Alan Marke and Director of Programmes Jim Reid, the company specialises in creating distinctive and high-quality scripted, broken and narrative comedy, comedy-entertainment formats and gameshows. They are currently in development with Comedy, Drama, Animation and Documentary projects for all major UK broadcasters.

So Awkward was created by Julie Bower and Produced by Sally Martin for Channel X North and commissioned by Cheryl Taylor at CBBC. Series 2 returns to the channel this summer and Series 3 is set to air in 2017.

Labour calls for an electric vehicle revolution to back car manufacturers, create jobs and...