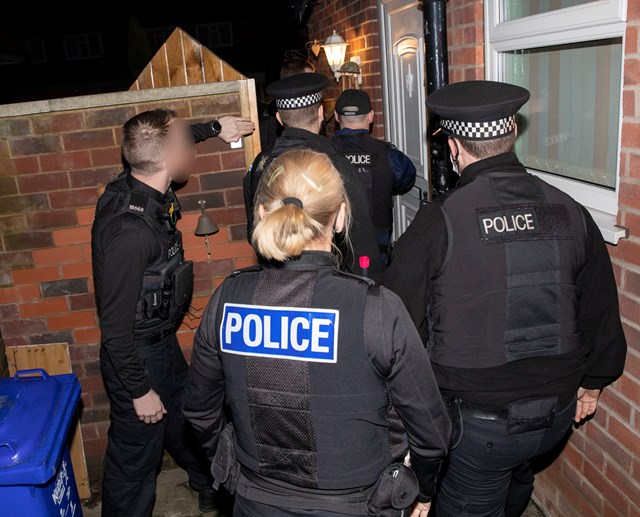 Five men, aged between 27 and 43, and a female, aged 25, were arrested on suspicion of a range of offences, including money laundering, fraud, and conspiracy to supply class A and B drugs.

Large amounts of cash and items were seized under the Proceeds of Crime Act, as well large quantities of drugs and a number offensive weapons.

Today’s action formed part of Operation Achilles – an investigation into an organised crime group involved in the large scale supply of class A and B drugs within Greater Manchester and the UK.

Operation Achilles is part of GMP’s strand of the wider nationwide Operation Venetic work – an NCA-led initiative focussing on the takedown of the encrypted comms platform ‘EncroChat’.

Detective Inspector Madeline Kelly, of the GMP Challenger Manchester, said: “Today’s action makes up months of intricate investigative work by Challenger Manchester and our partners – including local councils, HMRC, the NCA, and Department for Work and Pensions – to tackle organised criminal activity and bring to justice the people whose criminal behaviour blights our communities.

“The EncroChat hack has provided GMP and law enforcement agencies across the nation with an opportunity to investigate this high-level serious criminality – allowing us to apprehend offenders with a view to prosecute.

“Another important aspect in these investigations is the intelligence passed to police by members of the public and it can often play a crucial part in our investigations.

“If you have information that could aid our investigations into the trade of drugs across Greater Manchester then please get in touch with the police on the numbers provided below and anonymously via Crimestoppers.”

Superintendent Richard Timson, district commander for GMP’s City of Manchester division, said: “We are committed to disrupting and dismantling the trade of drugs across Manchester and the wider region.

“Today we have managed to remove a large quantity of drugs and weapons from our community. These drugs have a hugely destructive impact on our communities and can only attract further criminality to the area.

“This is a clear step in the right direction in making Greater Manchester a safer place to live and work in.”

Jailed for two years for trying to throw package of cannabis and tobacco over...