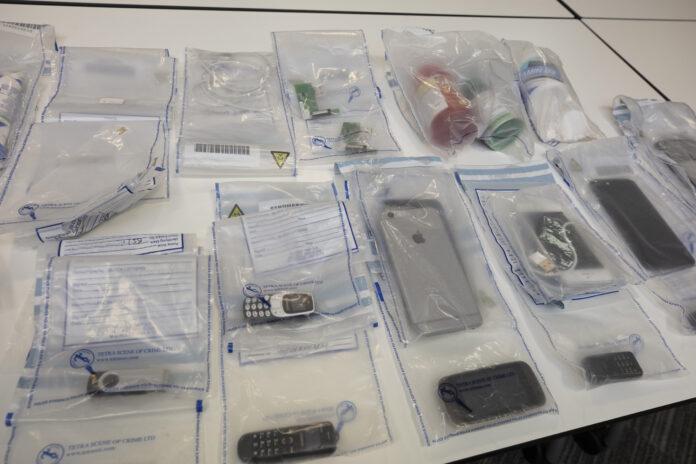 Illegal phones, electrical devices and drugs have been seized following an operation to crack down on organised crime gang members operating from inside prison.

Following a significant increase in the number of phone ‘throw overs’ – where mobile phones are thrown over the prison walls at the prison, a joint-operation named Operation Dragonfire has been launched between Greater Manchester Police (GMP), HMP Forest Bank, HMPPS and North West Regional Organised Crime Unit (NWROCU), to further the work carried out by prison staff.

Intel driven targeted cell searches were carried out, and 14 phones, two devices similar to a Wi-Fi router, a large number of steroids, several sim cards and other electrical contraband were all recovered, which will prove highly disruptive to the criminal network.

Following the cell searches, a large-scale operation took place to target those involved in getting the phones into the Sodexo-run prison.

With support from GMP’s Drone and Tactical Dog unit, as well as NWROCU, a range of covert and overt patrols were deployed.

Prisoners having access to mobile phones inside prison is illegal, and can compromise the sites security, posing risks to other prisoners, prison staff and the general public.

Once inside, mobile phones can be used by prisoners to continue operating as part of an organised gang.

These illicit phones can be used to Co-ordinate throw overs of further prohibited items, such as phones and drugs, Intimidate witnesses and Continue to manage organised crime networks

The aim is not only to remove illegal mobile phones which have made their way to those serving time in prison, but also target those facilitating the ‘throw overs’ and those communicating with offenders behind bars – all of which are a criminal offence.

Operation Dragonfire is driven by intelligence, and has been established to target the higher tiers of criminal networks here in Greater Manchester. The intelligence determined which cells were searched, to ensure the work being carried out will target those who are deemed to be the highest threat, both inside and outside Forest Bank.

The multi-agency operation is also working to disrupt those who are communicating illegally with offenders in prison, by targeting all numbers in contact with the seized phones. Those making illegal contact with prisoners will be cautioned and advised that they are breaking the law and the consequences of doing so.

Detective Chief Inspector Chris Mossop from Programme Challenger at Greater Manchester Police said: “We have become aware of alternative ways people are smuggling phones into prison. The suspension of social visits due to the Covid-19 pandemic is believed to be linked to an increase in the number of phone throw overs, which has become a prevalent issue in prisons.

“Phones smuggled in not only put the prison at risk, but also the wider public. If offenders have unlimited access to unmonitored phones, they are able to continue managing organised crime and co-ordinate further criminal activity both in and outside of the prison.

“Furthermore, once inside, phones can be sold to a captive audience at a higher rate than in the community, making vulnerable prisoners and their families subject to exploitation, and safeguarding risks.

“Working in partnership with HMP Forest Bank, HMPPS and North West Regional Organised Crime Unit (NWROCU), we are able to prosecute those involved. GMP’s involvement, often means that those caught using the banned mobile phones receive an increased prison sentence, and I hope this serves as a stark warning to all involved.

“A lot of work has gone into this operation and the volume of contraband recovered shows how successful the targeted cell searches have been, in addition to the success of patrols, and packages that were intercepted.

“I would also like to reiterate to those involved in the wider picture. Communicating with prisoners who are using illegal mobile phones is a criminal offence, as is throwing phones over. The collaborative work and large-scale action of Operation Dragonfire demonstrates that this will not be tolerated here in Greater Manchester.

“Patrols will remain in place, and we continue to take this extremely seriously. I would also ask anyone with any information in the event of throw overs taking place, or any information relating to this type of crime to report into us.

“We regularly rely on the public for information, and continue to act upon intel that comes into us to continue to drive our strategies and operations forwards.”

“HMP Forest Bank is one of the largest, busiest and most complex prisons in the country with challenging populations, including the highest number of organised crime group males in the North West.

“We are constantly reviewing our activities in response to illicit phones but acknowledge that we always have more to do to disrupt organised crime networks.

“Multi-agency operations like Dragonfire have a huge impact, and I would like to extend my thanks to all agencies involved.”