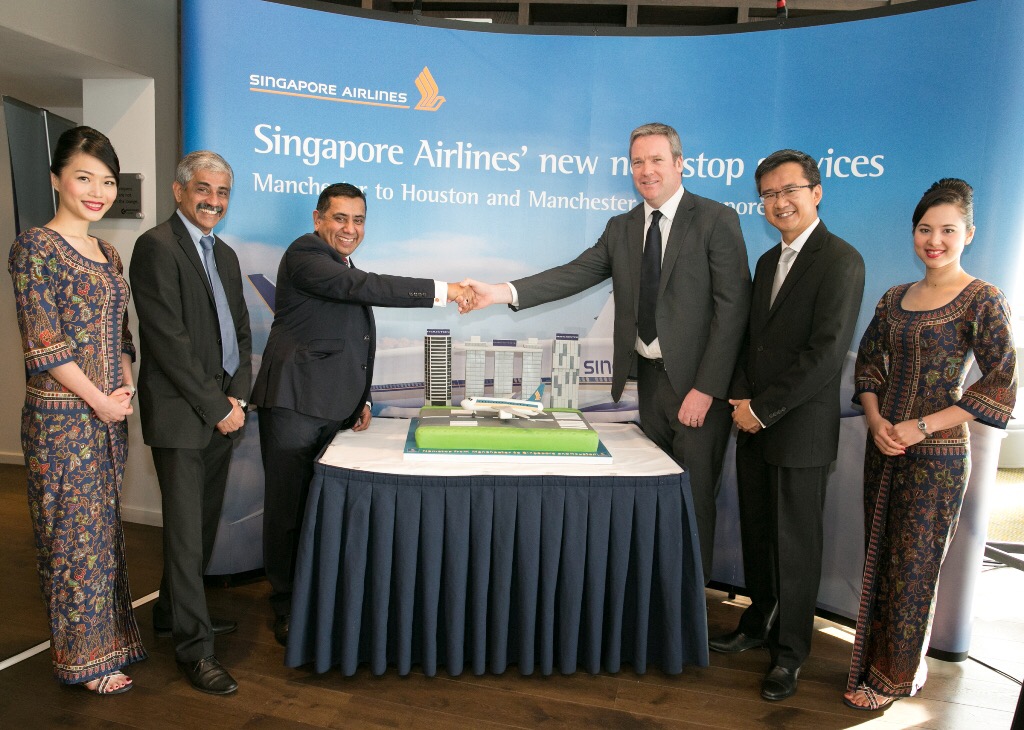 Singapore Airlines has launched its two new non-stop routes from Manchester with various celebrations at Manchester Airport along with a formal event held this morning, attended by Aviation Minister, Lord Ahmad.
The inaugural flight to Houston departed on Sunday 30 October, with Singapore Airlines celebrating by putting on a real American display with dancing cheerleaders performing at the check-in desk, along with an American themed breakfast for passengers, cake cutting and ribbon cutting ceremony at the gate.

Alongside the Minister, this morning’s formal event was attended by Singapore Airlines customers, regional businesses and dignitaries overlooking the inaugural flight, as it pushed back for its first non-stop flight to Singapore.

Both routes make Manchester the only airport outside of London to offer these destinations and underpin the airport’s role within the Northern Powerhouse. Furthermore it showcases the role the UK’s third biggest airport plays while capacity is so constrained in the South East.
Aviation Minister Lord Ahmad said: “It is a pleasure to be in Manchester to mark the inaugural flight between Singapore, Manchester and Houston, Texas. Every year nearly 100,000 people fly from the North West to Texas or Singapore – for holiday or for business. Now they can fly directly. Leading academic institutions such as the University of Manchester have also added their welcome and highlighted how this will help strengthen research partnerships in Texas whilst businesses across the North West will now have direct access to the economic engine that is Singapore.

“Manchester Airport’s offering of new long-haul routes, coupled with its £1 billion investment, will connect the Northern Powerhouse to even more long haul destinations and is another step in building an outward facing, global Britain.”

Speaking about the launch Singapore Airlines Vice President for Europe Subhas Menon said: “Our new non-stop routes to Houston and Singapore from Manchester are the first outside of London to offer travellers more convenient travel to Texas. We are committed to this region and want to continue to develop Singapore Airlines relationship with the people and businesses of the North West. With our partnership with Flybe, these routes are also open to travellers from 11 cities across the UK including Aberdeen, Edinburgh, Glasgow and Inverness”.

Ken O’Toole, CEO of Manchester Airport, said: “This new service to Houston with Singapore Airlines will open up a whole new part of America to business and leisure passengers across the North. At a time when capacity in the South is constrained, we are adding more passengers and routes than ever before. Houston and Singapore, along with a wealth of other recent new routes, can only be found at Manchester in the UK outside of London. This underpins the role we play in the North as the global entry point of the Northern Powerhouse and as economic provider and job creator for the region.
“Furthermore, at a time when there is a lot of uncertainty following the Brexit vote and ties with Europe, this new east and west route connecting America to Manchester and on to Asia, clearly highlights the role we play with connecting the North to international markets, unlocking trade, tourist and economic opportunities.
“We look forward to working closely with Singapore Airlines to ensure the success of the route and their continued growth from Manchester Airport.”

A host of regional businesses who attended also championed the importance of the route, and how it would improve the way they operate and open up new trade opportunities.
James Blake, CEO at Hello Soda, said: “There is real appetite from government to make the Northern Powerhouse a success, but in reality it’s the addition of private sector decisions such as this that will truly help disruptive businesses with international growth ambitions to succeed.

“Texas is home to some of the fastest growing tech cities in the US, which was a major factor in our decision to headquarter our North American operations there. Having a direct flight to Houston will save us a significant number of travel days each year and enable better engagement between our US and UK teams.
“We also do a lot of business in Singapore, and often use it as a meeting point with our Asia office heads who are based out of Bangkok. Again, having a direct flight will make doing business in Asia considerably easier.”

James Igoe, investment manager and head of Far East at European Wealth, said: “As a business with clients in both Manchester, Singapore and the wider Far East the importance of direct connectivity cannot be underestimated.

“The degree of our participation in Asia continues to grow so as well as saving us time and money, this will further raise the profile of Manchester as a leading global city at the heart of the Northern Powerhouse, a concept that is resonating well in the Far East.”
The non-stop routes from Manchester will be operated five times weekly. Singapore Airlines will operate a 777-300 on both routes with first, business and economy cabins available. Business Class passengers will enjoy 51” seat pitch which converts into a 76” long bed with the option to pre-book exquisite meals.

Man arrested over death of David Jones in Bolton