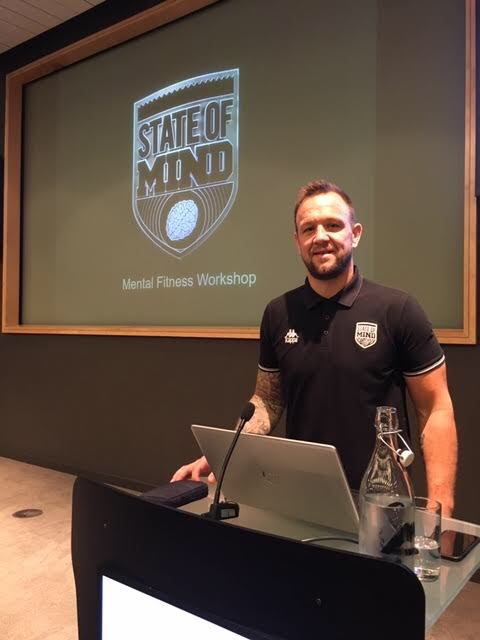 Rugby League legend Danny Sculthorpe opened up to a group of construction workers in a bid to shine a light on suicide.

The former England player talked to more than 100 contractors for over an hour when he visited a construction site at Alderley Park, Cheshire, last week in partnership with Manchester- headquartered fit-out firm Workspace Design & Build.

His visit comes on the back of statistics which show the risk of suicide for those working in building and construction trades is 1.6 times higher than the national average and that more than a quarter of construction employees have considered taking their own life.

Danny, who openly talked about his struggle with suicidal thoughts after injury stalled his glittering career, ran a one-hour session for the Workspace team currently on-site at Alderley Park.

Danny, who played for Widnes and Wigan among others during his career, is an ambassador for the sport charity State of Mind and regularly hosts frank discussions about depression and suicide as part of his presenter role.

He said: “It is shocking that, in the UK in 2019, you are more at risk from suicide than death by accident on a building site. Men seem to find it particularly difficult to talk about their mental health and admit they might need help so it is hugely important that we go into these male environments and show them that it really is important to talk.

“The session with the Workspace team was really good – the workers seemed happy to open up and not just listen to my story but open up about their own struggles.”

At the session, Danny told his personal story – how a back operation following an injury in training led to him contracting MRSA and sepsis while in hospital and then resulted in a serious lower spinal injury which, in turn, cost him his career and his home.

Russell Davis, owner and MD of Workspace Design and Build, said: “It was great to have Danny here to talk to the team about mental health. Health and wellbeing are very much front of mind at Workspace and we realise how important it is for our staff to talk about how they’re feeling. This is something we greatly encourage both on our sites and also within the office environment.

“We recently launched a new company mantra, Listen, Create, Care. The care element of this campaign is really important to us and lies with our own staff as well as our projects and clients.

“When we get someone like Danny in here – a bona fide sports legend and role model to many – it really does make a difference. People see that talking about depression and suicidal thoughts can actually be really beneficial to their personal well-being.”

Danny is also supporting a  suicide prevention campaign across Greater Manchester – Shining a light on suicide – which has been launched to encourage people in Greater Manchester to talk about suicide, the biggest killer of men under 49 and women aged between 20 to 34 in the region, so no one sees it as a solution to their problems

More than 200 people a year take their own life in Greater Manchester and leaders across the city region have said “enough is enough” and that “it’s time to break the stigma of talking about suicide, suicidal thoughts and suicide bereavement.”

It follows research and evidence among people who have considered suicide, that talking honestly and openly about suicide helped to save their lives.

Now 39, father-of-three Danny says that ‘opening up’ saved his life.

He said: “The biggest thing that saved my life, even more so than medication, was talking.

“Shortly after telling my wife and parents about my suicidal thoughts a massive weight came off my shoulders. We spent hours talking and crying.

“Unfortunately, the injury I sustained left me feeling that I could no longer provide for my wife and children. I went from being an elite sportsman to being pretty much bed bound and knowing that I wouldn’t play again. Bottling it up pushed me to the edge.

“But I got it all off my chest which was an unbelievable feeling. I also visited my GP, was prescribed antidepressants and spoke to a counsellor on many occasions.”

Danny added: “I’m now much better and am so thankful that I spoke to my wife and parents on that day when I’d reached my lowest point. If I hadn’t, and instead acted on my suicidal thoughts, I would have ruined so many people’s lives.

“I’m shining a light on suicide because I believe that we shouldn’t and cannot be afraid of talking about suicide. If you are struggling, don’t keep things bottled up like I did, seek help.”

The #shiningalightonsuicide campaign has been commissioned by Greater Manchester Health and Social Care Partnership and is supported by the Mayor of Greater Manchester Andy Burnham and all the partners including NHS, councils, police, fire, emergency services, armed forces’ veterans, and many others.

Encourage someone to talk before suicide seems their only option. Together we can help prevent suicide. Find out how at www.shiningalightonsuicide.org.uk

Young shun alcohol and cigarettes across the NW