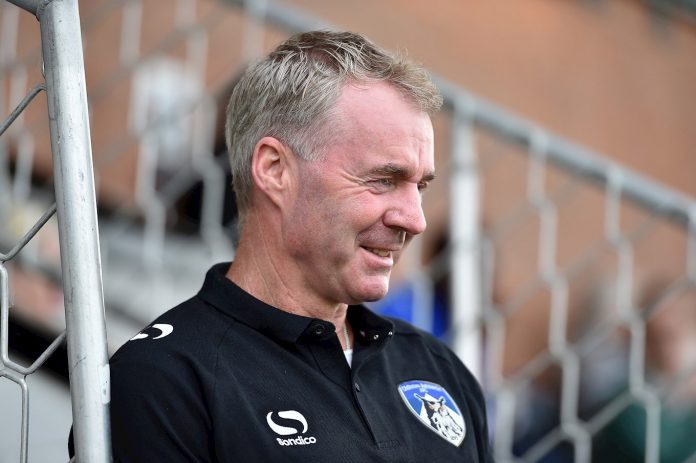 “We played against a good team, even this early in the season it wouldn’t surprise me if they go on and win the league.

“You can’t give the goals away like we did, I think they started better and they looked brighter.

“We’re lacking a cutting edge but I thought we played, we passed it and we tried to be brave.

“I thought Dan Gardner for his first game was excellent, you can see what he’s got in his game.

“I’m proud of my players in the way they kept going. I’d probably say that’s the best we’ve played against a really good team.

“Again, without working the keeper too much we’ve had a lot of crosses in the box, a lot of set plays and corners but we’ve got to score goals to win games and it’s a problem.

“Last year, not conceding goals was a big thing for us, if we’re going to try and be more attacking we’ve got to defend a lot better and we need to keep clean sheets but scoring goals is more important because that is what will win you the game.

“I’m not too disheartened because I thought we played all right and against other teams we’d probably have a good chance of winning the game.

“I’ve got to try and stay positive, it’s no good for me to keep saying ‘I need this and I want to do that’.

“We stick together, we keep fighting and that’s what we’ve got to do and hopefully that result we’re after is around the corner.”

Oldham travel to Blackpool next Saturday