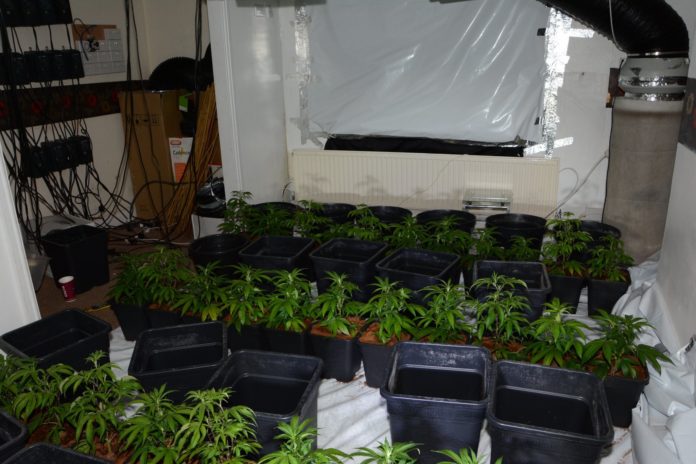 Seven people have been jailed following an investigation into the production and supply of cannabis masterminded by two serving prisoners.

Five men and two women have been sentenced to more than 38 years at Manchester Crown Court for drugs offences.

Operation Hollow was an investigation launched by GMP’s Challenger Manchester team in July this last year into the production and supply of cannabis.

The conspiracy is estimated to have produced 100kg of cannabis, with a street value of £700,000.

The court heard how the enterprise was masterminded by Ryan Ratcliffe and Ben Harding, who were both serving inmates at HMP Magilligan in Northern Ireland throughout the period of the conspiracy.

Ratcliffe and Harding used the prison telephone system to communicate with the defendants on the outside in order to coordinate the cultivation and supply of the drug.

On the 27 July 2017, police were called to reports of a disturbance at an address on Crab Lane in Blackley.

The house was searched and it was found to contain 61 cannabis plants, as well as a selection of equipment used in the cultivation of the drug including lights, fans, transformers, fertiliser, thermometers and compost.

The court heard how Ryan Ratcliffe had instructed a close associate, Joshua Williams, to run the cannabis farm. At the property there was evidence of at least four previous cannabis crops having been grown. Each crop would have been capable of producing up to 7 kg of cannabis, and each kilo sold for between £5,300 and £5,500 – bringing the estimated value of cannabis growth at this property to over £150,000.

Ryan Ratcliffe recruited his mother, Marie Ratcliffe, to help facilitate the conspiracy. She assisted with paying the rent on the Crab Lane property and she paid the other people involved on behalf of her son.

In November 2017, officers searched at lladdresses in Salford and Heywood and discovered two further cannabis farms. Two men involved in cultivating and supplying the drugs, Benjamin Pickles and Stephen Ratcliffe, were arrested inside the addresses.

Throughout the conspiracy, co-accused Amanda McCurdy was involved in the production of cannabis, acting as a financial support for the operation and involved in the supply of the drug. She was arrested following the discovery of over £16,000 worth of cannabis at a property on New Devonshire Square in Salford.

Detective Inspector Andy Buckthorpe, of GMP’s City of Manchester borough, said: “This investigation centred on a complex drugs conspiracy being operated and overseen by serving prisoners at HMP Magilligan in Northern Ireland.

“Despite serving significant custodial sentences for similar matters, Ryan Ratcliffe and Ben Harding continued to operate their drug dealing enterprise from behind bars in Northern Ireland.

“They recruited other people to manage the day to day business of cropping, selling and replenishing cannabis farms across Manchester and utilised a number of close family members to assist with managing the operation and dealing with the money back in Manchester.

“This was very much a family enterprise and the individuals involved were making vast profits through this criminality.

“Illegal drugs have no place on our streets and bring misery to communities, and I hope today’s sentences highlight the fact that GMP and Challenger Manchester will continue to target those who involve themselves in organised crime even when they are in prison.

“We have processes in place to monitor and target serving prisoners who may seek to continue their criminality despite being incarcerated, and we will continue to work with partner agencies such as the prison service and other law enforcement agencies to disrupt and dismantle organised criminal networks of this nature.”

33 year old arrested on suspicion of murder after man in his 20’s stabbed...