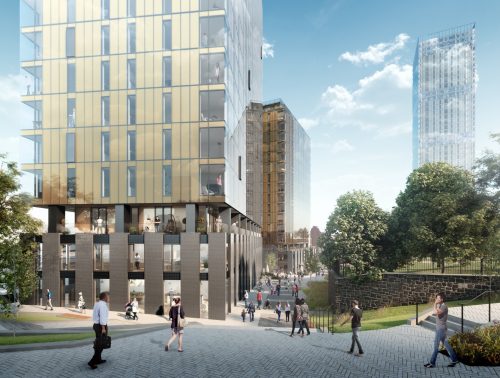 The Serious Fraud Office has announced that it has opened an investigation into a suspected fraud concerning the failed Angelgate, Dantzic Street development.

Along with two other cases of suspected property fraud in Liverpool, in conjunction with Merseyside Police, as part of a joint investigation with North-West Regional Organised Crime Unit, search warrants were executed at a number of addresses across the UK on Friday.

The original developer Pinnacle entered administration in September of 2017 after it had acquired the planning rights  to build a £77m, 344-home scheme comprising two towers as part of the so called Northern Gateway into the city centre.

The Far East Consortium (FEC) acquired the two acre Dantzic Street site last April, picking up the scheme for £5.2m after an auction of which they were the only bidders.

It has been alleged that buyers had pumped money into the scheme for two years without seeing any building work commence before Pinnacle went into administration.

In a statement on their website, The SFO said that it cannot comment any further at this stage, and any significant updates will be posted on the SFO website.

Man in his 50’s in critical condition after Wigan shooting

One year after an attempted murder in Bolton police investigating want to speak to...