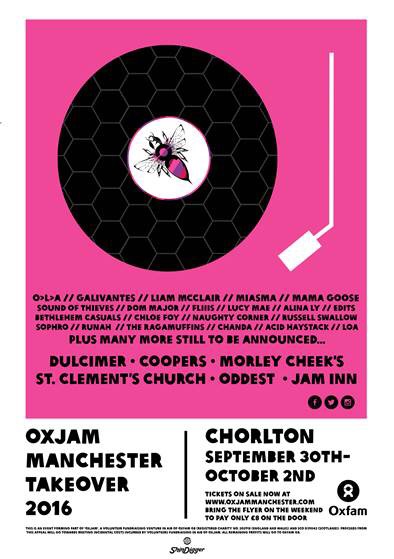 The Oxjam Manchester Takeover is fast approaching and before it hits the streets of Chorlton on the first weekend of October, the Takeover team have some stellar fundraising events lined up. These are not only fantastic opportunities to raise funds and awareness for Oxfam’s global work, but these are great excuses to get out of the house, do something different, meet new people, enjoy some live music and generally have a good time.

Their first event this month was the Oxjam Manchester Rockover which took place on Saturday 17th September at Rock Over Climbing Centre. The day kicked off with introductory climbing sessions, followed by a climbing competition, and will be rounded off by live music from Miasma and David Jaggs.

On the same day as the climbing event, we also be took to the streets of Chorlton at the Maker’s Market for a swap shop and vinyl sale. Both events were an incredible success, raising around £250 for Oxfam and promoting the festival in two different areas of Manchester. It was a great taster of what to expect in a fortnight!

Next up, the Oxjam Manchester Takeover team will be running two buskathons to showcase the diverse musical talent that our spectacular city has to offer, such as Liam McClair, Lindsay Munroe, Morgan Harper Jones and Caoilfhionn Rose. The acts will be serenading passengers at Oxford Road (22nd September) and Victoria (24th September) train stations. Providing the soundtrack to people’s usually less-than-exciting train journeys, this will raise the profile of Oxjam Manchester whilst supporting local and emerging artists from the city we are lucky enough to call home.

Last, but by certainly no means least, this year’s Oxjam Manchester Takeover Festival is set to take place on the weekend of September 30th to October 2nd in Chorlton. Showcasing a wide range of live music and performance art over three days, the volunteer led festival will raise funds and awareness for Oxfam.

The line-up encompasses over fifty emerging artists, representing a variety of genres from soul to reggae to indie to folk to rock to electronic and beyond. Over the weekend, we’ll be taking to six of Chorlton’s finest venues – St Clement’s Church (where a silent Art Auction will accompany the music), Dulcimer, Coopers, Oddest, Morley Cheeks and The Jam Inn. Featuring a strong representation from local artists, headline performances come from O>L>A (accompanied by a Lumière Brothers-inspired dance performance), Galivantes, Liam Mcclair and Miasma. We’ve just announced our first line-up, with many more artists to be revealed.

Oxjam is made up of multiple events taking place across the UK throughout October, all with the aim of uniting music lovers and poverty fighters. Oxjam is now in its tenth year and has raised over £2.8 million for Oxfam since 2006. Over the past three years, Oxjam Manchester had raised over £12,000 coordinating events in the city centre, the Northern Quarter and Cholrton. The tenth anniversary will see an extra-special selection of musicians and a weekend jam-packed with live music across notable venues like Dulcimer, Coopers, Oddest and Morley Cheek’s.