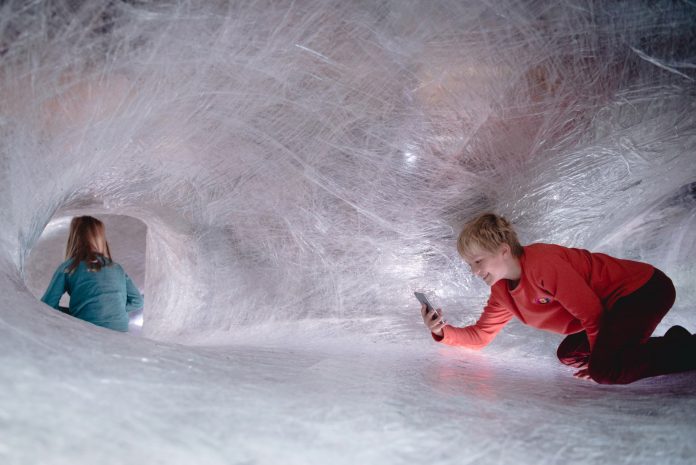 Tape, the hit immersive experience that sold out every day during this year’s Manchester Science Festival, is to return to the Museum of Science and Industry for a limited run of just six days.

There will be a second opportunity to experience crawling around inside the giant tunnels in the museum’s historic 1830 Warehouse when Tape reopens on Tuesday, October 31. It will run for six days until Sunday, November 5.

The giant structure, created by award-winning artists Numen/For Use, was built using 330 rolls of sticky tape. It proved so popular that it was completely sold out every day.

We’re thrilled to provide a second opportunity to experience this playful and immersive creation and would like to thank the artists for giving us this opportunity to reopen Tape to the public.”

Visitors during the festival included Dame Mary Archer, Chairman of the Board of Trustees of the Science Museum Group, and a group of cosplaying Spidermen.

Tape will remain free, as it was during the festival, but spots will still need to be booked in person on the day at the museum. This is to reduce the number of dropouts and give as many people as possible the opportunity to take part.

Manchester Science Festival, now in its 11th year, is the largest science festival in England.
This year’s festival ran from Thursday, 19 October to Sunday, 29 October and featured more than 100 events at venues across Greater Manchester including Rochdale, Oldham, Stockport and Bolton as well as the city centre, making it the most bold, creative and ambitious science festival in the UK.

The headline exhibition, Robots, will continue at the Museum of Science and Industry until April 15 2018/ The exhibition explores humans’ 500-year quest to recreate themselves in mechanical form.