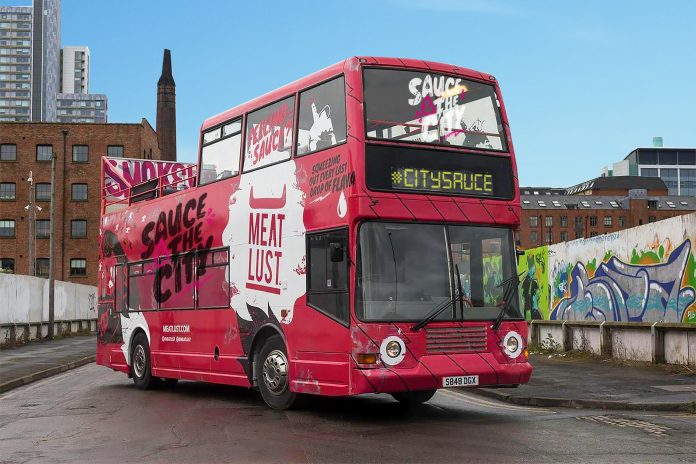 As part of a summer spectacular, Meat Lust has announced ‘Sauce and the City’, a 10-day mouth-watering food and booze tour across the city of Manchester.

Set to start on Thursday 20th July at B.eat Street on Deansgate, ‘Sauce and the City’ will see Meat Lust team up with its favourite food spots from around the city.

Exclusive miniature dishes, using the Meat Lust sauces, will be created to showcase the very essence of their menu – a two-bite wonder destined to get food fans screaming out for more.

To ensure the bus is well-oiled in the sweltering July heat, Meat Lust has also teamed up with some of its favourite breweries: Shindigger Brewery, Tickety Brew and BrewDog. Beer tasting is a crucial part of the ‘Sauce and the City’ experience and the on-board bar will keep hungry guests refreshed as they move from one location to another.

Celebrating music from Manchester’s famous music scene, guests will also be treated to a soundtrack of up and coming artists from around the city, including tasty tunes from Stillia, Kevill and Spring King and of course, there’ll be food on-board too.

Spinningfield’s very own Beastro has developed a unique, one-off menu, which will be prepared on the custom-fitted Primo grill on the top deck. Like Meat Lust, Beastro’s meaty credentials come from the butchery industry, so it’s a perfect match for ‘Sauce and the City’.

Scott Dixon, Director of The Flava People and third-generation flavour fanatic, said: “Manchester is our home and we’re proud to call ourselves a Mancunian business. It’s an incredible city – blessed with great food, amazing booze, brilliant people and an infectious energy.

“To capitalise on this, we’ve come up with is a pretty innovative concept in ‘Sauce and the City’. We’re orchestrating unique and exciting collaborations with some of the most celebrated new characters Manchester has to offer.

“The food partners have been tasked with creating a miniature dish; something packed with punchy, powerful flavours to give guests a mouthful they’ll never forget. It’s a chance for the chefs to get really creative by using one of our Meat Lust sauces and creating something unique.”

As if that’s not enough, the Meat Lust guys have invited its newly announced celebrity ambassador Adam Richman, Host of Travel Channel’s ‘Man vs. Food’,’Secret Eats with Adam Richman’ and author of Straight Up Tasty, to get involved. Adam, a self-proclaimed food enthusiast, will be tasting all the dishes, munching his way through the city and meeting Mancunian fans throughout the week.

Further details will be announced on how you can get involved so keep your eye out and follow the Hashtag: #CitySauce on social media.

The bus departs outside B.eat Street on Deansgate.