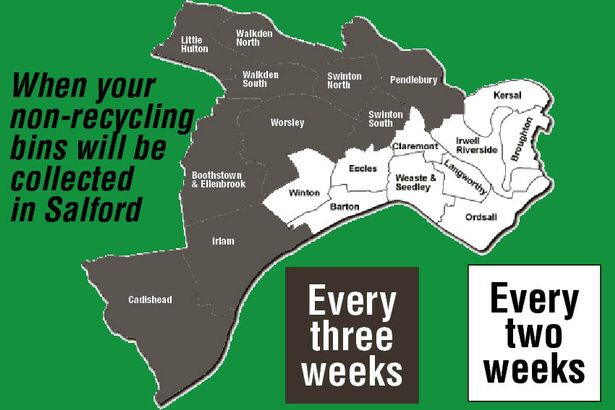 More Salford residents will be finding that their general rubbish will only be collected once every three weeks.

The council has announced that after Fifty thousand households – half the city – have been taking part in a scheme, the initial reports show it has proved such a success – saving over 1,000 tonnes of waste from landfill as well as thousands of pounds in disposal costs.

Now it is now to be rolled out to more areas of the city.

From March next year households in Eccles, Claremont, Weaste and Seedley will join the scheme.

Information will be sent directly to households involved early in the new year.

Councillor David Lancaster, Lead Member for Environment and Community Safety, said: “We want to say a huge thank you to all the residents who have supported our drive to recycle more and save money.

“We are on target to reduce the disposal costs, as a result, which in these times of austerity is fantastic news. That’s money which can be ploughed back into protecting front line services. And they have saved the equivalent weight of two and a half Boeing 747 jet planes from being buried in a hole in the ground.

“It’s quite simple – every tonne which we cannot recycle, costs the council increasing amounts of money. Every tonne recycled earns us money which can be put back into services, and it’s better for the planet.

“People have responded magnificently – with nearly 14, 500 people asking for new recycling bins which we’ve been happy to provide.

“We’re now gearing up to roll this out to more areas of the city – with the same advice and support for people in the new areas as in the existing pilot and I hope residents will support the scheme.”

UK home to the third highest childcare costs in Europe

First case of Coronavirus in Rochdale confirmed as UK has biggest rise in a...