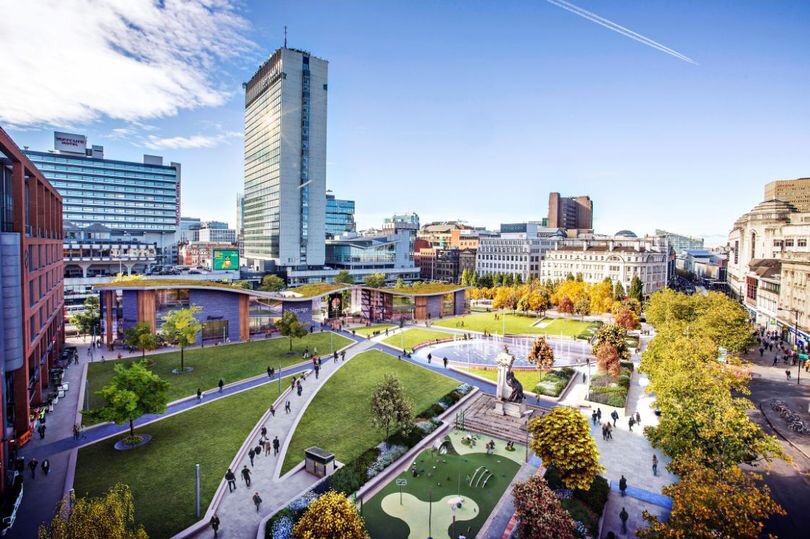 Major plans have been announced this afternoon for a revamp of Piccadilly Gardens which will include the demolition of the unloved wall.

Under the proposals there would be £2m worth of investment in improvements to the Gardens to make them more attractive and welcoming to families while deterring anti-social behaviour.

The plans include remiving the existing Pavilion building and feature wall and replacing them with two new Pavilion buildings linked by a covered area of new public space for year-round use.

Improving lighting and the design of the current Pavilion building and Gardens to deter anti-social behaviour and improve natural surveillance. Greater Manchester Police have been consulted on the design

The plans will seek to address damage to pavements and grass by raising the grassed areas and re-laying pedestrian thoroughfares and will see family-themed restaurants and a new coffee outlet to the new Pavilion buildings.

The proposals will maintain the pedestrian route from the Metrolink stop and bus station through the Gardens to other parts of the city. It is also proposed that advertising screens at two locations will be sympathetically integrated into the design to provide the Council with a sustainable annual income which will contribute towards the ongoing maintenance costs of Piccadilly Gardens.

The proposals come after Manchester City Council and L&G have been in discussions about creating an improved, safer and more attractive community environment at Piccadilly Gardens. During these discussions, the Council and L&G, taking into account public opinion, identified that the removal of the ‘wall’ and carefully targeted garden improvements would significantly improve the Gardens.

They will complement investment which has already taken place in and around Piccadilly Gardens, including work which the Council is carrying out to bring the fountains back into use.

Features such as the children’s play area and existing public art will remain in place.All improvements will be phased to maintain as much public access to the Gardens as possible.

A joint public consultation – setting out the proposals in more detail – will be held by the Council and L&G on Friday 2 and Saturday 3 December in the area next to the Media Lounge on the ground floor of the Town Hall Extension. People will have a chance to view the detailed plans and provide feedback.

Sir Richard Leese, Leader of Manchester City Council, said: “For all the debate it has generated in recent years, Piccadilly Gardens remains an incredibly well-used public space. But we recognise that there are aspects which have proved unpopular and others where there is scope for improvement, including design improvements to deter anti-social behaviour and enhancing our own ongoing maintenance of the space.

“These proposals will provide both real and sustainable improvements which are compatible with Piccadilly Gardens’ role as a major thoroughfare used by hundreds of thousands of people a week as well as a destination where people can meet and relax.

“We believe the scheme which L&G have brought forward following detailed discussions with the Council is a constructive response to all these considerations but are keen to engage with the public to get their thoughts on the proposals.”

Bill Hughes, Head of Real Assets, Legal & General Investment Management, said: “We see the partnership with Manchester City Council and the proposal for Piccadilly Gardens as an opportunity to regenerate a prominent and well-used space in central Manchester that is also a thoroughfare to other parts of the city.

“Under the proposals L&G will dedicate £2m worth of investment in improvements to Piccadilly Gardens to make them more attractive and welcoming to families while deterring anti-social behaviour.

“The proposed Pavilion design will bring a new vibrancy and economy to Piccadilly Gardens which we hope residents can be proud of and visitors to Manchester will see as a destination in its own right.L&G has a longstanding track record of working with progressive local authorities to bring forward regeneration and improvements to social infrastructure projects. We see Piccadilly Gardens as a prime example of this kind of collaboration in action.”