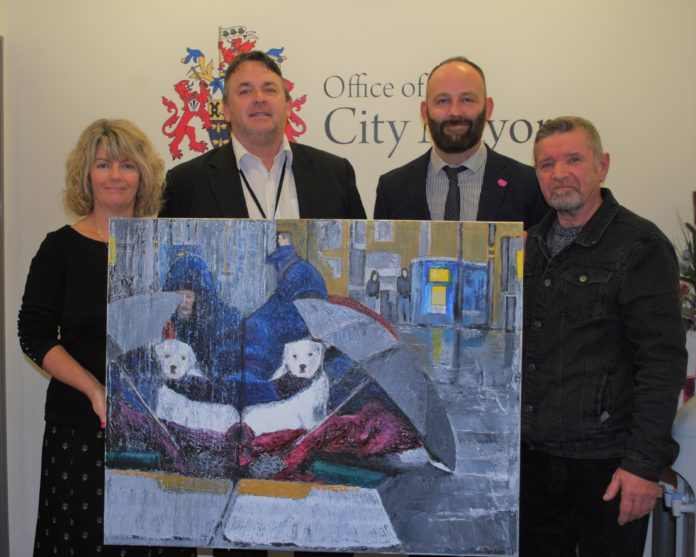 Retired miner Paul Jordan has put brush to canvas to present a moving gift to his native city.

An earlier piece drawn by Paul inspired the logo for ‘A Bed Every Night’ scheme which helps rough sleepers into accommodation.

Now he has presented a moving painting of a homeless man with his dog to City Mayor Paul Dennett as a gift to the city of Salford.

Paul, from Little Hulton, who formerly worked at the Agecroft mine, now volunteers at Start in Salford a charity in Salford which uses an innovative range of creative arts and horticultural activities to help people overcome mental health issues, build resilience and improve their self-confidence.

“I love art but didn’t have time for it when I was working and had a young family. I was referred to Start by my GP in 2004 and realised I wanted to study art again,”

Paul went on to achieve a first-class honours degree in visual arts from the University of Salford.

He now specialises in sculpture and said while he has no experience of homelessness himself, he often sees and chats with people on the streets of Manchester.

“I’m delighted to add Paul’s painting to Salford’s collection. He has captured a key social issue with dignity and compassion.”

Paul’s painting is now on display at Salford Civic Centre in Swinton.

30 year old woman cyclist in serious condition after being hit by a car...