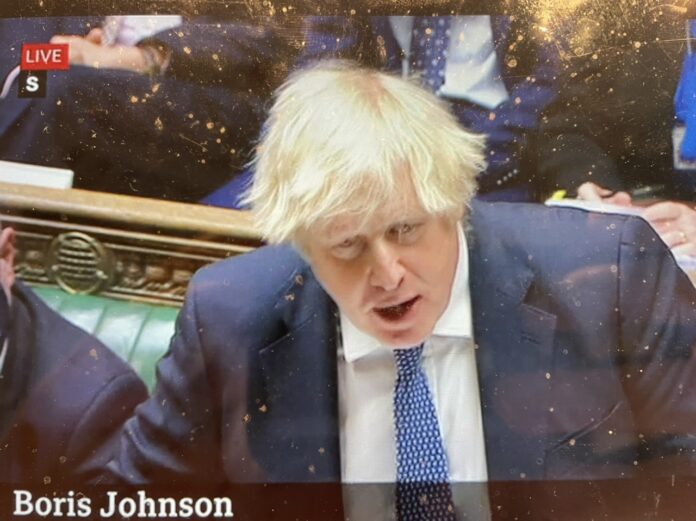 Boris Johnson has apologised for the video where staff joked about lockdown Christmas party and orders inquiry into whether rules were broken but still says that as far as he was aware, no rules were broken

During a stormy Prime Minister’s Questions in Westminster he came under repeated attack from both the Labour leader Kier Starmer and the leader of the SNP Ian Blackford, the latter calling for his resignation

Starmer said: The PM, the government, spent the week telling us there was no party. The public now think they PM was taking them for fools that he was lying. They’re right aren’t they?” while asking

He also accused of being “caught red handed” over No 10 party. “Even Ant and Dec were ahead of the Prime Minister”.

while reminding him that 489 people died on the day of the bash and asking him:

“Do you have the moral authority to lead & ask the British people to stick to the rules?”

During the exchanges former advisor Dominic Cummings revealed there was a Downing Street Flat Party on Friday November 13 last year, when the rest of the country was in lockdown

Later on in the exchanges Greater Manchester MP William Wragg asked the Prime Minister about the expected Plan B announcement, saying  “Very few will be convinced by this diversionary tactic”.

Sir Roger Gale,MP for North Thanet in Kent, said Boris Johnson had been “blindsided by information he was given” regarding a Christmas party alleged to have taken place in Number 10 last year.

“It’s worrying, isn’t it, that the man at the top of the tree doesn’t appear to know what’s going on in his own building two floors below him – I find that of concern,” he told the BBC.