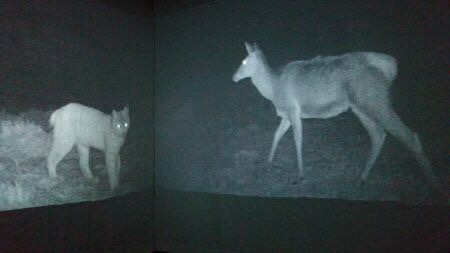 ASalford project in which scientists studied areas affected by the Chernobyl disaster to find out more about the effects of nuclear radiation on animal life has been shortlisted for a prestigious award.

Led by Dr Mike Wood, Reader in Applied Ecology from the University of Salford’s School of Environment and Life Sciences, the project has been shortlisted in the Research Project of the Year category of the Times Higher Education Awards.

In collaboration with Prof Nick Beresford (NERC Centre for Ecology & Hydrology & Honorary Professor at the University of Salford) and Dr Sergey Gashchak from Ukraine’s Chornobyl Center, Dr Wood conducted research in the heart of the Chernobyl Exclusion Zone (CEZ).

This area of Ukraine remains heavily contaminated from the 1986 nuclear reactor accident and is largely devoid of people.

The team developed a ground breaking approach to the assessment of radiological impacts on wildlife. They pioneered a collection method that used more than 250 motion-activated camera placements placed throughout the area.

The cameras captured more than 15,000 days of footage over a year, creating more than 45,000 images to study the diversity and abundance of large and medium-sized mammals.

The team have also collaborated with Dr Paul Kendrick from the University of Salford’s Acoustics Research Centre to place special bio-acoustic recording devices across the area, providing more detailed information about the zone’s animal life.

Dr Wood and Prof Beresford have reported their initial results in the journal The Biologist, and have found that – contrary to some existing reports – much of the CEZ is thriving with large and medium-sized species such as elk, wild boar, deer and wolves.

They have found this is partly due to the declining effect of human civilisation – contributing to high level debates around rewilding and the potential to create a Chernobyl nature reserve.

The team have worked closely with the International Atomic Energy Agency and International Commission on Radiological Protection. Their work has fed into guidance produced by these organisations and has contributed to debates on future energy sources and nuclear waste options.

Dr Wood has also worked with Japanese experts, as they tackle the Fukushima Daiichi contamination legacy.

The project has captured the public’s imagination. Dr Wood worked with Dr Simon Campion and Dr Michal Cieciura from the University of Salford’s THINKlab – and science communication expert Prof Andy Miah – to create an immersive installation held at the Museum of Science and Industry during Manchester Science Festival. The installation used virtual reality technology to enable visitors to explore the sites Dr Wood studied.

His work has been covered in the media, with a documentary piece about the project for Channel 4 News, and articles on the BBC News website and in New Scientist, The Chicago Tribune and the Los Angeles Times
Dr Wood said: “The CEZ, which reached its 30th anniversary this year, represents a unique natural laboratory to study the impact of radiation levels on wildlife.

“This project has not only enabled myself and my colleagues to challenge some of the claims about declining animal populations in the CEZ, it has also allowed us to work closely with international organisations and to contribute to important global debates about nuclear power, about conservation and particularly about the rewilding of our planet’s wilderness areas.

“It’s a huge honour for the project to have been shortlisted for this award, and it’s a testament to the many talented people who have worked with me to make it such a success.”

A festival of Shostakovich at Chetham’s

Heathrow verdict-This is a momentous decision not just around the immediate impact on Heathrow...