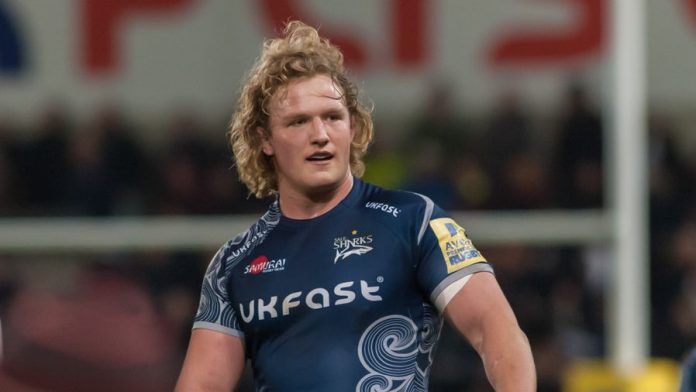 Ross Harrison has become the latest key figure to commit his long-term future to Sale Sharks, with the prop signing a new four-year contract with the club.

And news of Ross’s new contract is also further demonstration that Sharks director of rugby Steve Diamond is both building and sustaining a squad capable of challenging for major honours going forward.

At just 25 Ross may still be young in years but he has emerged as one of the Sharks’ most experienced operators since making his debut against Spanish minnows La Vila back in 2012.

Since then, the Bolton-born loose-head operator has gone on to establish himself as one of the key cornerstones of the Sale forward line, chalking up more than 150 appearances in total and more than 100 in the testing environment of the Premiership.

Earlier this season, Ross achieved another notable first when he dotted down for his maiden Sale try during the 36-7 home league win against London Irish.

Having established himself as one of the most consistent performers in the Premiership, Ross’s impact has also registered on the international radar with the former Lymm High School pupil having figured for England sides against the Barbarians at Twickenham in both 2014 and 2017 as well as with the Saxons side in 2016.

Ross’s superb consistency also saw him invited to train with Eddie Jones’ England squad last May to provide yet more evidence that he is very much a contender for further international recognition.

Du Preez returns to the starting line up for Sale Sharks

Belle Vue On The Double In Play Off Semis