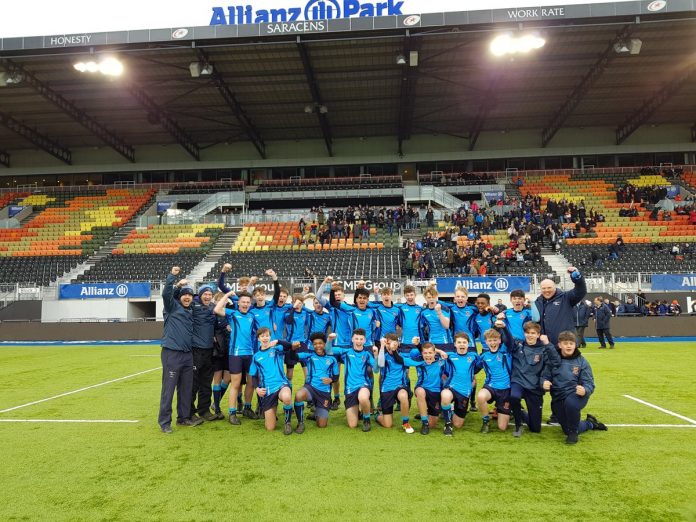 THE Manchester Grammar School will be flying the flag for the north of England after reaching the Final of the England Rugby National Schools Cup with a thrilling last-minute victory at the weekend.

The School’s Under-15s side faced Warwick School in the semi-finals of the Cup on Sunday 2 March, held at Allianz Park – the home of Saracens – in North London.

The competition is open to all schools, state and independent, across the country, so to have reached the last four was already a fantastic achievement by the MGS side, who put out a strong Sedbergh team in the quarter-finals.

Up against a much-fancied Warwick side looking for their fifth final in sixth years, the MGS boys were 21-3 down with 10 minutes to go and looked like going out, but staged an extraordinary comeback that will live long in the memory.

Tries from Noah Ellis and Haeden Johnson reduced the arrears, and, with just a minute remaining on the clock, scrum-half Tom Archer picked up the ball and sprinted over the line.

Captain Ben Simpson then kept his composure under immense pressure and kicked the winning conversion, sparking jubilant scenes and booking MGS’s place in the final in the most dramatic of fashions, which will be held on 14 March at the home of rugby, Twickenham Stadium, where the boys will face Whitgift School.

The man-of-the-match was deservedly given to MGS vice-captain Seb Murphy.

Director of Sport at MGS, Mark Walmsley, said: “The boys and coaches were magnificent and deserve all the credit. It was a fantastic game of rugby and the boys showed incredible character to overturn an 18-point deficit with ten minutes of the game left. It was one of the best comebacks I’ve ever seen from an MGS side and they thoroughly deserve their day at the home of rugby, Twickenham Stadium, later this month.”

Steve Swindells, Director of Rugby at MGS, added: “It has been an incredible journey that the boys have been on this season, and all the coaching staff have been immensely proud of their achievements.

“To reach a National Final without scholarship boys is a very difficult task these days, but their enthusiasm, commitment and ‘never-say-die’ attitude has been outstanding. They have had a number of very close matches and played against some of the strongest rugby schools in the North on their run and to see them grow, develop and mature with each game has been hugely rewarding.

“This hasn’t been lucky. When you train nearly every day and put in the effort to analyse opposition as best as possible, have classroom sessions when it’s snowing outside and play to your own strengths anything can be achieved. It will be a fantastic occasion down at Twickenham and the boys will have created a memory that will last a lifetime.”