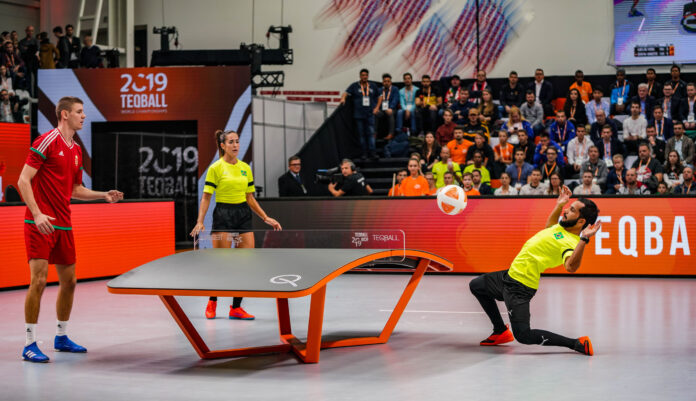 What is like a cross between football and table tennis, loved by players including Ronaldinho and is still relatively unknown in the UK despite being the world’s fastest growing sport?

Teqball, it’s coming to Cathedral Gardens on Friday 3 September 2021, and you can try it out for free.

Played using a standard football on a special kind of curved ping pong table, teqball began in Hungary in 2012, and is the fastest recognised new sport in the world.

If you fancy yourself as a keepy-uppy whizz, then teqball could be the game for you. Players bounce the ball back and forth across the net, using any part of their bodies except for the hands and arms. You cannot use the same body part twice in a row.

The strictly non-contact sport, which can be played as singles or doubles, has almost 4.5m social media followers and lists David Beckham, Justin Bieber and Adam Levine from Maroon 5 amongst its fans.

Recently added to the list of sports to be played at the European Games in 2023, Team Teqball now has its sights set on making an appearance at the 2028 Olympics in Los Angeles.

But closer to home, Mancunians will be able to step up and try it out for size on Friday 3 September at the Góbéfest festival in Cathedral Gardens.

Two teqball tables are on special delivery to the city, courtesy of Teqball and Consulate General of Hungary in Manchester, along with a team of expert ‘animators’, who will demonstrate how to play like a pro. One of the tables will be centre stage at Góbéfest, with festival goers invited up to test out their skills.

After the festival, the tables will be donated to the England Amputee Football Association and to Manchester City Council. The final location of the second table is planned to be at the National Cycling Centre.

“It is a significant part of our cultural mission to promote the very best of Hungarian innovations to a wide audience in the UK. We are glad to present Teqball to this city with rich football traditions within the context of a festival dedicated to the culture of the Carpathian Basin.”

“Aiming to introduce people of all ages to the sport of teqball, a FITEQ delegation will welcome the public to come and test their skills at the world’s fastest growing sport. A team of specialist sport instructors will be on hand to share tips and tricks and encourage new teqers to become a part of the global teqball family. ”

“This year, we are really excited to also bring an iconic Hungarian sport, from one great footballing region to another.”

Góbéfest is a free annual event that celebrates the culture, music and food of Transylvania and the Carpathian Basin region of Eastern Europe. Previously based in Albert Square, this year it will take place in Cathedral Gardens, outside the National Football Museum.