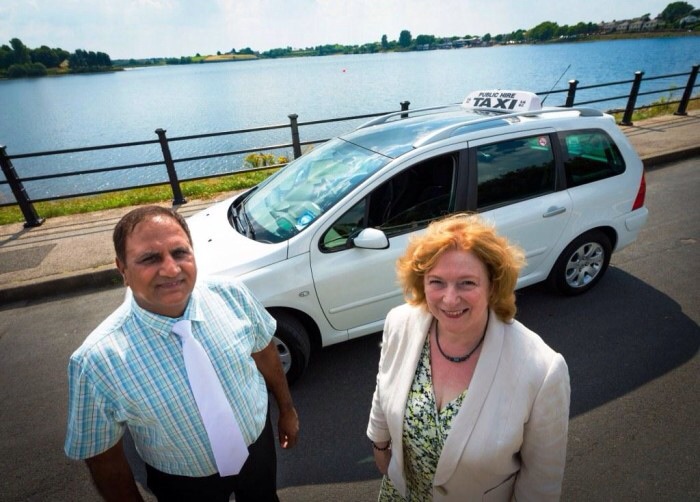 A group of Rochdale cabbies have turned tour guide as part of a scheme to help visitors discover the many treasures of the area.

The scheme to turn drivers into ambassadors for their town saw 22 eager volunteers attend a training session during which they found out all about what makes Rochdale great.

Drivers from Car 2000, Central and Town Taxis found out about the history of the borough as a major weaving and cotton district, and its stunning Grade I Listed Town Hall, which is widely regarded as one of the best examples of Victorian architecture in the country.

They also learned about the Flodden Window in St Leonard’s Church in Middleton. The window, which commemorates the Battle of Flodden Field in 1513, is thought to the oldest war memorial in the country.

Lesser known facts covered during the course, which was also attended by some hackney carriage drivers, include the fact that Space Shuttle nose cones were manufactured in Littleborough.

Fast forward to the present day and the drivers also picked up vital information for those looking for a pitstop at one of the three breweries in the borough, the Pictish, the Baum and the Mill brewery at Nutters Restaurant, all winners at the Manchester Food and Drink Awards 2008.

The drivers can also tell their passengers about the regeneration work happening in the town, including the new Leisure Centre and Transport Interchange as well as the planned retail and leisure development.

And anyone who wants to know how to make the most of summer in Rochdale will find that the ambassadors are full of ideas, including enjoying the outdoors at Queen’s Park in Heywood, voted the nation’s favourite in 2011, having afternoon tea at Nutter’s restaurant and visiting Hollingworth Lake.

The course was organised by Rochdale Borough Council and Link4Life, who deliver leisure and heritage services in the borough.

Councillor Cecile Biant, Caninet Member for Regulatory Services at Rochdale Borough Council, said: “Our taxi drivers come into contact with hundreds of people every week, many of whom will be new to the borough, so they’re perfectly placed to sing Rochdale’s praises. There are so many interesting facts to find out and so many things to enjoy that I can’t think of a better welcome to give to our visitors.” Taxi drivers who have completed the course will all display a purple sticker in their car, so people will know they are an ambassador.”